Lalu Prasad and his son Tejashwi Yadav have maintained that the conviction, given by a special court in Ranchi last month, was a case of political vendetta. 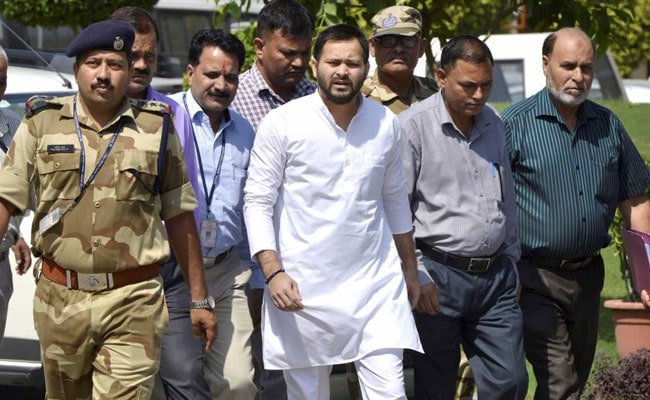 Patna: Tejashwi Yadav today ripped into Bihar Chief Minister Nitish Kumar and his ally, the BJP, after a court sent his father Lalu Yadav to jail for three-and-a-half years in a second case of fodder scam today. The 69-year-old leader and his son have maintained that the conviction, given by a special court in Ranchi last month, was a case of political vendetta.

Tejashwi Yadav, who was the deputy Chief Minister in the Grand Alliance government headed by Nitish Kumar, shot off a sarcastic post.

Thank you very much Nitish Kumar

Mr Yadav - a vocal critic of the BJP and Prime Minister Narendra Modi -- who received his sentence on video-conference from Ranchi's Birsa Munda jail, also made his point on twitter.

Thank you very much Nitish Kumar

Mr Yadav's party had been shunted out of power last year after Nitish Kumar dumped the Grand Alliance with him and the Congress and entered a partnership with the BJP. The rift between the allies came following corruption allegations against Tejashwi Yadav. Before that, the BJP's Sushil Modi had made multiple allegations of corruption against Lalu Yadav and his family. Mr Modi has succeeded Tejashwi Yadav as the Deputy Chief Minister.

"If Lalu Prasad would have compromised with the BJP, then he would have been given the title of Raja Harishchandra," Tejashwi Yadav further said, referring to a mythological king famous for his adherence to truth and virtue.

The BJP immediately hit back. Party spokesperson Sambit Patra said, "His ego of social justice has been exposed. It is because of social injustice that he's in jail".

Calling the partnership between Lalu Yadav and the Congress "an alliance of corruption", he said, "Rahu and Sonia Gandhi are both out on bail... one more wicket has fallen".

Promoted
Listen to the latest songs, only on JioSaavn.com
The Congress reacted cautiously, with senior leader RPN Singh saying, "The Congress has always waged war against corruption. As far as the alliance is concerned, it is with RJD and not particular individuals".

Lalu Yadav was convicted on December 23 for criminal conspiracy, forgery, use of forged documents, among others, in a case that relates to the fraudulent withdrawal of Rs 89 lakh from the Deoghar district treasury between 1990 and 1994. He has now been convicted in two of the five cases linked to the  fodder scam.