Asha Kumari -- the Punjab in-charge of the All India Congress Committee -- was trying to defend a Minister who is being asked to step down for allegedly sending an "inappropriate" SMS text to a woman official a few weeks ago. 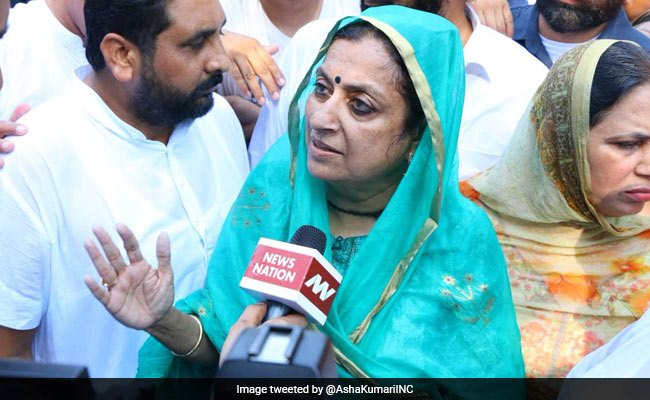 Asha Kumari said the Congress did not receive any complaint against the Punjab Minister.

Sending an inappropriate text message does not amount to sexual harassment, a Punjab Congress leader said on Friday, triggering criticism from the opposition ranks.

Asha Kumari -- the Punjab in-charge of the All India Congress Committee -- was trying to defend state Technical Education Minister Charanjit Singh Channi, who is being asked to step down for allegedly sending an "inappropriate" SMS text to a woman official a few weeks ago. However, her remark only served to further agitate her detractors, with the Shiromani Akali Dal (SAD) claiming that Congress president Rahul Gandhi had assigned the task of "covering up the misdeeds of Technical Education Minister Charanjit Singh Channi" to Ms Kumari.

Ms Kumari had made the remark to reporters on the sidelines of a Congress demonstration against the recent shake-up in the CBI. "Sending a message does not become a case of MeToo," she said. "Sexual harassment is different from messaging."

She also said that the party did not receive any complaint against Mr Channi, and Chief Minister Amarinder Singh has already expressed his views on the matter.

SAD president Sukhbir Singh Badal expressed shock over the remark. "It is shameful that a woman is belittling a fellow woman on the orders of Rahul Gandhi with a mind-boggling statement that text messages do not constitute sexual harassment," he said.

The Chief Minister had recently said that he has asked the minister to apologise to the official, and maintained that that the matter has been resolved to her satisfaction. The minister, for his part, said that he had sent the text to the woman "by mistake".

"When the Chief Minister has acknowledged the Minister's guilt, how can Kumari give him a clean chit?" Mr Badal asked, adding that she has belittled the MeToo movement "that seeks to expose and punish people like Channi".

Recalling how the Congress had demanded Union Minister MJ Akbar's resignation over sexual harassment allegations, the SAD president wondered why Mr Gandhi was adopting "double standards" on the issue. "Is Rahul silent about this criminal act because the minister is his blue-eyed boy?" he asked.

"If the Congress government cannot give justice to a woman officer, what will be the fate of ordinary women in Punjab who have no direct access to the chief minister or the corridors of power?" he wondered, reiterating the opposition's demand that Mr Channi be sacked from the Punjab cabinet.

The #MeToo movement was sparked off in India after actor Tanushree Dutta renewed a decade-old sexual harassment allegation against Nana Patekar. It then went on to expose several high profile individuals in the media.