Terrorism An 'Existential Threat', Hypocrisy Towards It Will Not Do: India 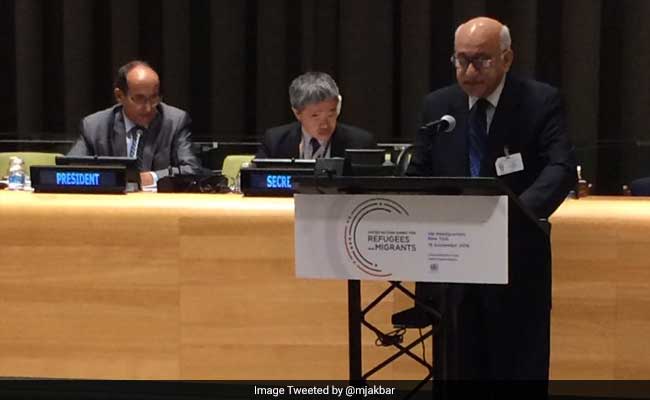 MJ Akbar asserted that terrorism cannot be characterised as good or bad.

United Nations: Describing terrorism as an "existential threat", India has said that "hypocrisy" towards the menace is unacceptable and underlined that terrorism is the "principle cause" of the large-scale refugee  movement.

"It is important to stress that today the geo-politics of the crisis points and proves that terrorism is the principle cause of refugee movements. Can we ignore this fact, we cannot. We do so at our peril," Minister of State for External Affairs M J Akbar said in his address to the UN General Assembly's first-ever Summit for Refugees and Migrants yesterday.

Mr Akbar asserted that terrorism is an "existential threat" and "hypocrisy towards this crisis will not do."

He underscored that for the millions of people fleeing conflict, war and poverty, terrorism is not characterised as good or bad.

"There is no good terrorism or bad terrorism and if you do not know the answer to this question, all you have to do is ask the refugee if he considers any terrorism to be good or bad," Mr Akbar said.

Stressing that terrorism is the "biggest danger" to human rights, Mr Akbar said large movements of people across borders serve as a reminder that the world has become a global village.

"We can only prosper or perish together, it is best that we learn to live in peace, prosperity and amity," he said.

Underlining that "prevention is better than cure", Mr Akbar said the international community has to address issues like terrorism, prevent armed conflict and facilitate development, which will help ensure people are not forced to flee their homeland.

"We have to find out what drives them towards seeking refuge. Prevention is better than cure. Perhaps prevention is the only cure," he said adding that preventing armed conflict, countering terrorism, building and sustaining peace to facilitating sustainable development and governance will prevent people from being forced to leave their homeland.

Terming the present refugee crisis as "unprecedented," Mr Akbar said the number of people on the move globally is estimated at close to 250 million or one in every 30 persons and three-fourths of all refugees come from just 11 countries.

Mr Akbar noted that it is disconcerting that just seven countries host more than half of all refugees and now almost 90 per cent of all refugees are hosted in developing nations. He said it is wrong to assume that host nations do not want refugees.

"It is assumed that only host nations do not want refugees. I ask do refugees also want to become refugees. They don't," he said.

He said the problem of the refugee crisis has been with the world for a very long time.

"Refugees are as old as war. The first consequence of war is death and the second is refugees. There is another kind of person seeking a new haven - the migrant driven by a second cruelty, hunger or economic aspiration, and both phenomenon are visible in the present crisis."

He cited the tumultuous year of 1971 when Bangladesh was fighting for independence and more than a million people from the neighbouring nation took refuge in India to escape the "genocide" that they were facing at home.

"People seeking shelter in our country have never been turned back. Our record has been unique," he said.

Mr Akbar said nationalism is the "contemporary architecture" of stability and "we understand its importance.

"The intersection of human need in a refugee crisis and national imperatives make this a complex issue," he added.

Promoted
Listen to the latest songs, only on JioSaavn.com
He said in more recent times, Indian migrants, including a cross section of professionals, skilled and less-skilled workers, have migrated to countries around the world and offered a "positive contribution to the diaspora".

He voiced India's commitment to working with all partners beginning next year in developing a global compact to ensuring a safe and orderly migration that is in the interest of all people.