Adding that the BJP has "no respect for democracy", Mr Rao said he would "continue to chase" the ruling party. 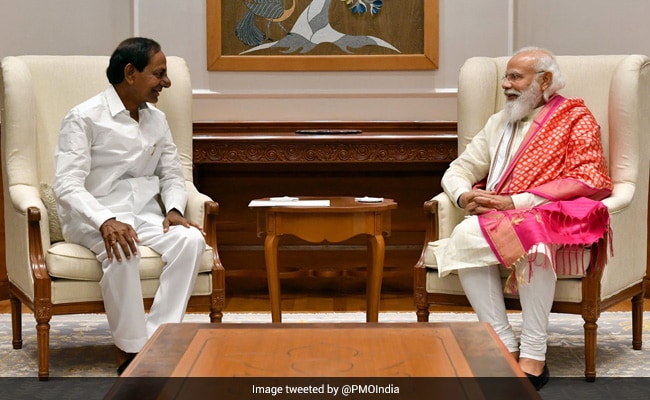 KCR attacked the BJP on a wide range of issues, from farm laws to the Hijab contoversy.

Telangana Chief Minister K Chandrashekhar Rao today continued his no-holds-barred attack on the BJP, saying it "has to be sent out as early as possible". At a press conference in Hyderabad, he called the BJP-led government "totally undemocratic" and slammed the PM on a range of issues from the now revoked farm bills to the controversy over Muslim girls wearing Hijab (headscarves)in Karnataka schools and universities. Adding that the BJP has "no respect for democracy", Mr Rao said he would "continue to chase" the ruling party.

"Why did they form governments where they did not get the mandate?" he asked, referring to states where the BJP formed the government with help from alliances and defections even when it was not the single largest party.

The Chief Minister accused the BJP of using the messaging service WhatsApp to "spread untruths". Religious sentiments are being provoked throughout the country, he said and added that "we need new thinking" and put "divisive ideas" aside to go forward.

Mr Rao hit out at Assam Chief Minister Himanta Biswa Sarma for his recent "father-son" barb at Congress leader Rahul Gandhi and appealed to BJP president Jagat Prakash Nadda to replace him. "Is this your culture? This is not our culture," he said.

Mr Rao's remarks came after Mr Sarma attacked Congress leader Rahul Gandhi for demanding proof of India's surgical strike in Pakistan in 2016 and airstrike in 2019, and asked whether the BJP had ever demanded proof of him being the "son of former Prime Minister Rajiv Gandhi". Mr Sarma added that the Wayanad MP had no right to demand proof from the Army.

Mr Rao said that there was nothing wrong with Rahul Gandhi asking for proof of surgical strikes. "Even I can ask for proof," he said and added that there's a "popular apprehension" of disturbances at the borders right before elections. "How can the BJP use the surgical strikes for political ends?" he said.

He called PM Modi "maafi ka saudagar", a spinoff on the Congress' "maut ka saudagar" barb on the PM after the Godhra riots, for backtracking on the three farm laws. "Why did they have to ask for forgiveness from the farmers?" Mr Rao said and claimed that before becoming PM, Narendra Modi was asked about the Godhra riots and he told Muslims that "it won't be repeated".

The Telangana Chief Minister defended his recent remark that the time has come that the Constitution in India needs to be rewritten. It was not a random and impulsive statement, he said. He claimed that he demanded a new Constitution for the welfare and betterment of SC, ST, OBC, and also for the protection of women and girls. "We need to increase reservations for Dalits, is it wrong?" he said.

On a possible non-BJP, non-Congress front for the 2024 general elections, he said that he can't predict what will happen tomorrow but "something will happen". It doesn't need to be a front of political parties but can be a "people's front", he said.