The highly controversial and misogynistic tweet quoted an interview of Pakistani-Canadian journalist Tarek Fatah in 2015, said the sources. 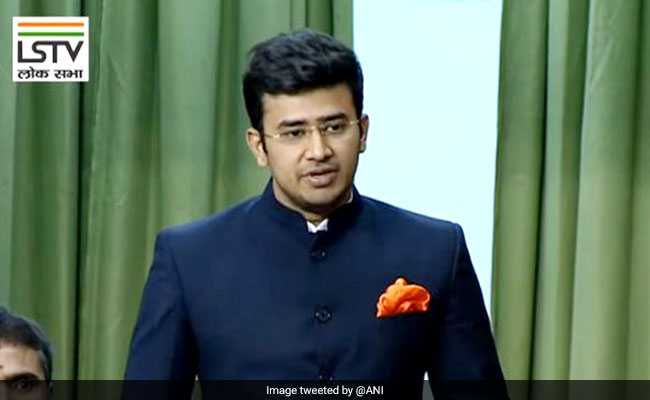 Tejasvi Surya is a first-time MP known for his controversial tweets.

BJP MP Tejasvi Surya on Sunday pressed delete after an old tweet on his timeline resurfaced and provoked waves of outrage. Sources close to Tejasvi Surya say the tweet was attributed to someone else but he was wrongly blamed for making the comment, screenshots of which are still being wildly shared.

The now-deleted tweet read: "95% Arab women have never had an orgasm in the last few hundred years! Every mother has produced kids as act of sex and not love:@TarekFatah."

The highly controversial and misogynistic tweet quoted an interview of Pakistani-Canadian journalist Tarek Fatah in 2015, said the sources.

In the interview with Swarajya, Tarek Fatah had made the statement in response to a question on reforms in the middle east in the aftermath of the "Arab Spring" of 2010.

"The main point was on female genital mutilation. How is Tejasvi Surya liable for someone else's view? If someone owes an explanation, it is Tarek Fateh," said sources close to the MP from Karnataka.

Mr Surya, 29, is a first-time MP known for his controversial tweets. This one drew comments all the way from the Middle East.

@PMOIndia Respected Prime minister @narendramodi India's relation with the Arab world has been that of mutual respect. Do you allow your parliamentarian to publicly humiliate our women? We expect your urgent punitive action against @Tejasvi_Surya for his disgraceful comment. pic.twitter.com/emymJrc5aU

The BJP gives tickets to Praggya Singh Thakur and #TejasviSurya etc because it helps popularise their hardline bigoted political profile.

How dumb are those targeting @Tejasvi_Surya for this? Don't they have basic understanding of what ":" means? He's quoting @TarekFatah ????‍♀#TejasviSuryapic.twitter.com/wHf3bCwd3A

In a 5 years old tweet, Member Of Parliament #TejasviSurya quoted Tarek Fateh and now people are targetting him without verifying anything. Strange!!

The row cropped up at a time there have been many provocative, hate-filled messages on social media after a large gathering of Islamic sect Tablighi Jamat in Delhi, held despite social distancing guidelines and without any caution, emerged as a super-spreader of virus cases. These posts have been called out in tweets from Kuwait, UAE and Saudi Arabia.

Recently, Princess Hend al Qassimi of the Sharjah Royal Family, warned a Twitter user after he put out several tweets targeting Muslims over the COVID-19 pandemic. "Your ridicule will not go unnoticed," she wrote.

The ruling family is friends with Indians, but as a royal your rudeness is not welcome. All employees are paid to work, no one comes for free. You make your bread and butter from this land which you scorn and your ridicule will not go unnoticed.

Some tweets on Sunday asked the royal to take not of Mr Surya's post.