Tejashwi Yadav Surfaces After Nearly A Month With A Health Update

Tejashwi Yadav said though he has been away, he has been following the updates on the outbreak of encephalitis in the state. 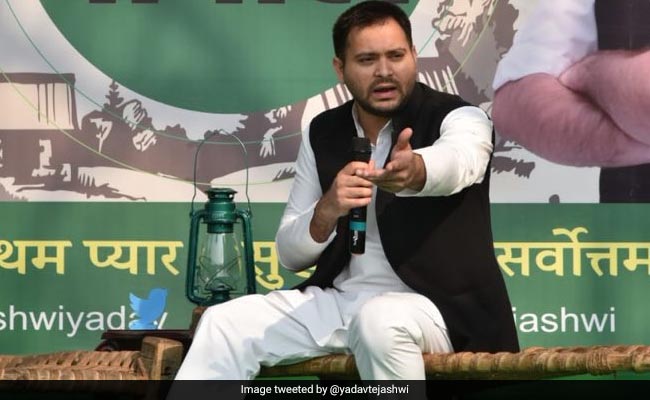 Bihar politician Tejashwi Yadav, not seen for nearly a month at a time Bihar has witnessed over 160 deaths due to the outbreak of Acute Encephalitis Syndrome, showed up on Twitter today to explain his absence. The 29-year-old Rashtriya Janata Dal leader said he has been busy undergoing treatment for the last few weeks for a knee injury.

"Friends! For last few weeks I was busy undergoing treatment for my long delayed ligament and ACL injury. However, I'm amused to see political opponents as well as a section of media cooking up spicy stories," Tejashwi Yadav tweeted this morning.

The political heir of Lalu Yadav was criticised by rival parties for not being present in the House when the monsoon session of the Bihar Assembly began yesterday.

Today, Tejashwi Yadav said though he has been away, he has been following the updates on the outbreak of encephalitis in the state. "Constantly following up the untimely loss of hundreds of poor kids due to AES. In this tragic moment asked party workers, leaders to visit affected families without getting into Photo-OP and MPs to raise it in Parliament & that's why PM responded. My Dear Bihar!I am very much here," he tweeted.

Since its birth RJD has been at the centre of poor peoples' struggle and that position is not lost only because of an electoral defeat. Wish to assure people of Bihar as well as our spirited cadre, we are going to fight with renewed commitment on everyday life issues of poor.

Having taken over the reins of his party following the imprisonment of his father, Tejashwi Yadav spearheaded the RJD's campaign for the Lok Sabha polls. However, the RJD contesting in alliance with four other parties including, its old ally the Congress, drew a blank in its worst-ever performance since inception in 1997.

After the debacle, Tejashwi Yadav only made a brief appearance in Bihar when the party held a meeting to review the causes that led to its crushing defeat.

Yesterday, when asked about the whereabouts of Tejashwi Yadav, his mother Rabri Devi had snapped at a journalist: "To your house".

The gap in the opposition ranks at the beginning of the assembly session - and an encephalitis outbreak that has made the government vulnerable - has left the leaders of the RJD red faced.

Many admitted in private that Tejashwi Yadav has not taken the loss in the elections well. He has been behaving like a reluctant politician, proving that he is not deserving of the trust and responsibility placed on him by his parents.