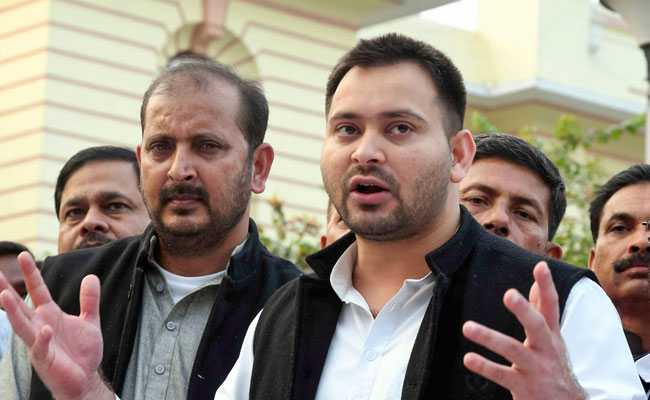 The Bihar government's attempt to get the bungalow allotted to former deputy chief minister Tejashwi Yadav vacated was met with a stiff resistance on Wednesday from RJD lawmakers, who staged a sit-in in front of the house.

The drive later was deferred over Mr Yadav's appeal in the Patna High Court against the eviction order.

Mr Yadav, who returned from New Delhi in the afternoon after the protests at his 5, Deshratna Marg residence were over, trained his guns at Chief Minister Nitish Kumar, whom he accused of occupying two government bungalows, besides illegally providing plush accommodations to his political aides and favourites.

According to official sources, officials of the district administration and police, armed with the eviction order passed by the building construction department, reached Mr Yadav's 5, Deshratna Marg bungalow in the morning.

The department had passed the order after the Patna High Court, on October 6, struck down a petition filed by  Mr Yadav in July, wherein he had challenged the government's earlier order to vacate the bungalow, which was allotted to him when he was the deputy chief minister and which he continued to occupy as the Leader of Opposition in the state Assembly.

About a fortnight ago, Mr Yadav had said he had filed an appeal before a division bench of the high court, challenging the single-judge order, and alleged that the government wanted him to swap accommodations with Deputy Chief Minister Sushil Kumar Modi.

RJD lawmakers, including MLC and the party's state president Ram Chandra Purve and MLAs Ejya Yadav, Vijay Prakash and Alok Mehta, staged a dharna in front of the bungalow, which was withdrawn only after the officials retreated upon a written submission by Mr Yadav's lawyer about the appeal filed in the high court.

Talking to reporters at the airport, Mr Yadav said, "Nitish Kumar should explain why is he occupying two bungalows -- the official residence of the chief minister and the one that was allotted to him as a former chief minister."

The bungalow is flanked on either side by 1, Anne Marg -- the chief minister's official residence -- and 5, Deshratna Marg.

Mr Yadav also questioned why some senior leaders of the Janata Dal (United), headed by Mr Kumar, were allotted plush accommodations in the state capital, though they were members of the Rajya Sabha.

"I also do not understand why this insistence on vacating the bungalow in favour of Sushil Kumar Modi. I was not allotted the bungalow after displacing him. He has been living in his current 1, Polo Road bungalow since long," the RJD heir-apparent pointed out.

Later, at a hurriedly convened press conference, Mr Yadav charged the chief minister with "negative politics" and "ill-will over my living in a house adjacent to his" and also accused Mr Kumar of "evading questions of the Opposition during the just-concluded Assembly session by not being present".

Referring to the controversy that has erupted over the alleged meddling in the Patna University students' union polls by JD(U) vice-president Prashant Kishor, Mr Yadav said, "Kumar seems to have forgotten that the university is his alma mater. He had learnt the ropes as a student leader under the guidance of my father Lalu Prasad, who was the president of the union."

"The chief minister should not have muddied his hands in campus politics. And if he is so desperate, then he should have thrown away the veneer of dignity and started campaigning for his party's students' wing himself," he added.