Recently, Tej Pratap Yadav wrote an application for a new house and met even the state's Building Construction Minister. But when that did not help, he paid heed to his advisors and put a call through to Nitish Kumar. 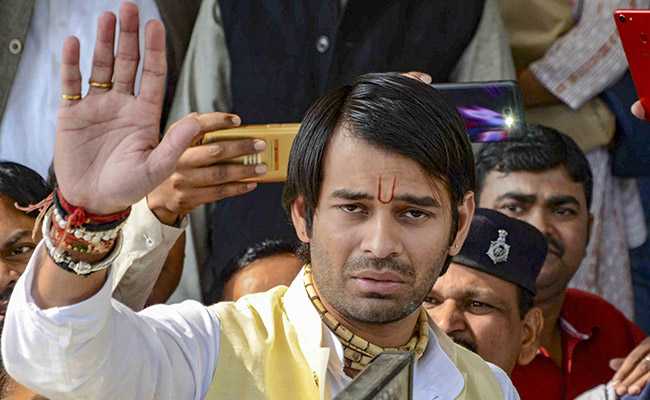 With his plans for divorce driving a wedge between him and his family, Tej Pratap Yadav has found himself a new house. And it was his "Chacha" (uncle) Nitish Kumar who helped him get it - with permission from Yadav Senior Lalu Prasad.

The house at 7 M Strand Road is the one where Nitish Kumar had stayed for a few months after stepping down as Chief Minister in July. He shifted to his official residence after forming a new government in partnership with earlier ally, the BJP. The house -- just few hundred meters from 10, Circular Road bungalow where the Yadav family lives -- remained vacant.

Recently, Tej Pratap Yadav wrote an application for a new house and met even the state's Building Construction Minister. But when that did not help, he paid heed to his advisors and put a call through to Nitish Kumar. "Chacha, mujhe ghar nahi milega? (Uncle, won't I get a house?)," he had pleaded, said a source close to him.

The reluctant Chief Minister intervened only after ascertaining the views of Lalu Yadav, who conveyed through his aides that a separate house might help Tej Pratap patch up with his wife.

The elder son of Lalu Yadav had been a minister in the Grand Alliance government led by Nitish Kumar. But when the alliance ended, he, along with brother Tejashwi Yadav - who was Mr Kumar's deputy - had focused their energies on targeting the Chief Minister.

Earlier this year, Tej Pratap had said he intended to put up a "no entry" board outside his parents' house for Nitish Kumar to reflect the party's stand that the doors of the Grand Alliance were closed to him.

But the familial ties with Mr Kumar, a long-time frenemy of Lalu Yadav, had continued.

Six months ago, the Chief Minister had attended the wedding of Tej Pratap and gave his blessings to the bride and the groom. On the occasion, he had shared dais with Lalu Yadav and was photographed hugging him.

But then Tej Pratap hugely upset his family, announcing that he intended to divorce his wife as they were poles apart. When his parents did their best to dissuade him, Tej Pratap left home, claiming he would not be back till they accepted his decision. His family was informed that he was on a pilgrimage.

He came back last month and focused on politics with renewed enthusiasm, announcing his willingness to take the reins of his party -- a matter that earlier led to conflict with younger brother and Lalu Yadav's heir apparent Tejashwi.

Tej Pratap, though, is not the only son of Lalu Yadav to beg uncle Nitish Kumar for help.

In September, faced with the prospect of losing the palatial 5, Circular Road bungalow that came with the Deputy Chief Minister's office, Tejashwi Yadav wrote to the Chief Minister, asking that he be allowed to retain it.

Two months later, he accused the Chief Minister of spying on him when Nitish Kumar's house was fitted with a CCTV camera pointed at his home.

Last month, when a team of district administration reached the house to demand that he vacate it, Lalu Yadav had got in touch with Nitish Kumar through Janata Dal United leader Prashant Kishor and asked that the officials be recalled.