Teachers should teach, not supervise cooking of meals, says court 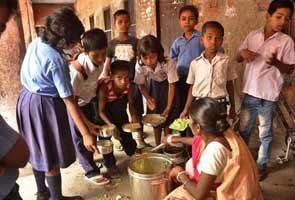 Allahabad: The duty of school teachers and principals is to teach students and not to supervise cooking of meals, the Allahabad High Court has observed, more than a week after a poisonous lunch served in Bihar killed 23 children.

"The duty of teachers and principals of schools is to teach the students and not to supervise the cooking of meals," a division bench comprising Justice Shiva Kirti Singh and Justice Vikram Nath observed yesterday amid questions whether teaching staff at government schools should be saddled with the implementation of the scheme.

The court was hearing a Public Interest Litigation (PIL) filed by Meerut-based UP Pradhanacharya Parishad.

The PIL had challenged an order of the District Inspector of Schools, dated June 19, whereby the earlier system of NGOs being entrusted with preparing mid-day meals was scrapped and principals were directed to get the food prepared in their respective schools under their personal supervision.

The petitioners had contended that the new system would interfere with the duties of teachers in Meerut and pointed out that NGOs were taking care of mid-day meals in a number of neighbouring districts.

Expressing surprise over the submission, the court said, "There must be uniformity across the state with regard to who shall be entrusted with a specific task like preparing mid-day meals".

Directing the state government to submit its policy with regard to mid-day meals by the next date of hearing on August 5, the court ordered that in Meerut, the previous system (of NGOs preparing mid-day meals) would continue until further orders.

Promoted
Listen to the latest songs, only on JioSaavn.com
23 children died in Bihar after taking poisoned food during a mid-day meal.

In Bihar, primary teachers began boycott of mid-day meal duties as announced even as the state government said it would inform the Supreme Court, at the directive of which the scheme was being implemented.