Jayadev Galla, the TDP's Guntur Lok Sabha MP, last night tweeted he was "fighting for farmers" and accused the cops of having "lost all sense of humanity" 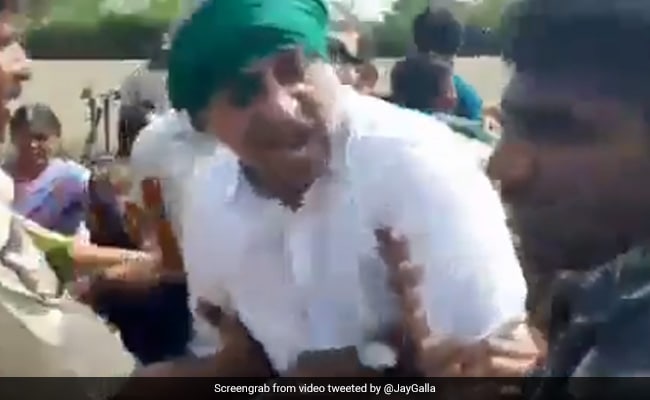 Telugu Desam Party leader Jayadev Galla, detained by police in Andhra Pradesh's Amaravati on Monday, during a rally to oppose the government's three-capital proposal, was today arrested, charged with non-bailable cases and jailed till January 31. The Guntur Lok Sabha MP, who late last night tweeted he was "fighting for farmers" and accused the cops of having "lost all sense of humanity" in their heavy-handed response to the protesters, was produced before a magistrate in the early hours of this morning and bundled off to a subjail in his constituency.

In a series of tweets posted on his Twitter account today, Mr Galla criticised the ruling YSR Congress for its "authoritarian" and "oppressive" stance and urged Chief Minister Jagan Mohan Reddy's administration to back out of a "foolish plan" that had cost the lives of 23 farmers in the past month.

"I'm fighting for the future generations of Andhraites who will be burdened by the economic cost of running 3 capitals... for the Amaravati farmers who will be ruined for expecting the Government to meet their commitments," Jayadev Galla tweeted.

The current Govt has made it a practice of disregarding court's orders. Now Police have also joined them and continue to impose #Section144, even after #SupremeCourt's ruling that it cannot be used to curb legitimate dissent & deny #people the right to protest. #SaveAmaravathipic.twitter.com/LN8Co3aKGU

In another tweet a dramatic video that shows him being surrounded, manhandled and dragged away by cops while protesters try to protect him.

"It's no more 'to protect & serve'. It's 'to provoke & strike'. The police seem to have lost all sense of humanity, resorting to excesses, with complete disregard for rule of law," he wrote.

It's no more "To #protect & serve". It's "To provoke & strike". The #Police seem to have lost all sense of #Humanity, resorting to excesses, with complete disregard for the #RuleOfLaw. I rue this day when the police raised their sticks to strike those whom they swore to protect. pic.twitter.com/iBw3QWldy9

In his most recent tweet Mr Galla reminds his followers that his grandfather, a freedom fighter, too had been sent to jail and indicated he was prepared to do the same.

He later said he took a part in the protest as he wasn't served a notice unlike over 50 leaders in Guntur and Krishna district. "Because I received a call from the Joint Action Committee (JAC), I decided to take part in 'Chalo Assembly'. If we would have planned violent protest why would we bring women, children and elderly people with us?" he was quoted as saying by news agency ANI.

"I condemn the politically motivated and unjustified arrest of Galla Jayadev by YS Jagan government. I demand his immediate release," he was quoted as saying by news agency ANI.

The manhandling and detaining of Jayadev Anna (@JayGalla) in his protest for Amaravati shows AP has become a police state. Police are given a license to do anything by @ysjagan govt. If an MP can't be guaranteed his right to protest, can commons citizen speak up?#saveamaravatipic.twitter.com/MS5R3nGrzx

Despite widespread protests yesterday the Andhra Assembly passed a controversial law aimed at establishing three capitals. The Andhra Pradesh Decentralisation and Inclusive Development of All Regions Bill-2020 says Visakhapatnam will be the executive capital, Amaravati the legislative capital and Kurnool the judicial of the state.

In the ruckus that broke out over the bill in the Assembly, proposed amendments by the opposition TDP, which saw 17 members suspended for "unruly behaviour" were rejected.

As arguments raged inside the building, hundreds of farmers and women from the Amaravati region broke through the security cordon and nearly breached the state legislature complex. Police resorted to a lathi-charge to disperse them.

The Andhra government, in a bid to appease the protesting farmers, has offered sops that include doubling of pension to Rs 5,000 and increasing tenancy tenure from 10 to 15 years.

Last week the Andhra government banned large rallies and gatherings across the state, invoking Section 144 that the Supreme Court had said should only be used as a last resort. Villagers in the state capital spoke of a curfew-like situation and outsiders were being asked to show identity cards.

The TDP government under Chandrababu Naidu, which was in charge before the YSR Congress stormed to power last year, meant to establish a single capital at Amaravati. In accordance with those plans, in 2014, 28,000 farmers gave up 33,000 acres of land.

Following the YSR Congress's scuttling of the idea, on grounds that the government cannot spend Rs 1 lakh crore to build a grand capital at Amaravati, the farmers fear they will suffer financial setback.