Amaravati Restrictions: Villagers in the state capital say there is a curfew-like situation and a large number of policemen are on duty. Outsiders are not being allowed without showing a proof of identity. 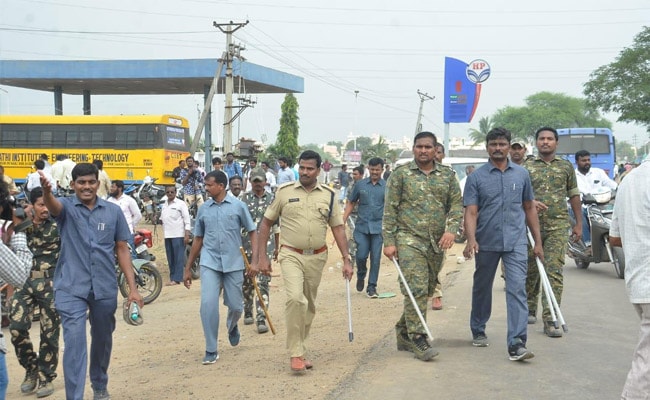 Large gatherings are banned across Amaravati amid protests by farmers.

Large gatherings and rallies are banned across Amaravati as protests by farmers, backed by Chandrababu Naidu's Telugu Desam Party (TDP), entered the twenty-seventh day today. The farmers have been protesting against Jaganmohan Reddy government's proposal of shifting the capital from Amaravati.

The state government has proposed to set up Amaravati as the legislative capital, Visakhapatnam as the executive capital and Kurnool as the judicial capital of Andhra Pradesh.

In 2014, 28,000 farmers had given up nearly 33,000 acres of agricultural land for the 'futuristic capital' proposed by then chief minister Chandrababu Naidu. The protesting farmers fear they will suffer financial setback if the capital is moved from Amaravati. They have said they would not celebrate Sankranti, Andhra's biggest harvest festival.

Villagers in the state capital say there is a curfew-like situation and a large number of policemen are on duty. Outsiders are not being allowed without showing a proof of identity.

A fact-finding team was sent on Sunday by the National Commission for Women to the Andhra capital to probe the allegations of excesses by police as visuals went viral of women being roughed up by cops.

On Sunday, TDP chief and former Chief Minister Chandrababu Naidu, who has attended several farmer protests in the last few weeks, joined a bike rally even though no permission was given.

YSR Congress leader Ambati Rambabu and state home minister Sucharita have accused the TDP chief and his party of spreading unrest in the state for his "political survival", claiming that he wants to protect lands of a particular community.

"Barbaric tricks (are) being played by the TDP chief Chandrababu Naidu and his henchmen to provoke farmers and capital city region people to create unrest across the state, disturb the law and order for political existence and protect the properties in the capital city region to benefit a specific community," the YSR Congress Party said as it accused the TDP of sharing fake videos and photos.

Today, the state government said a 16-member panel has been formed to seek farmers' views. Minister for Information and Public Relations Perni Venkataramaiah stated that farmers from 29 villages of Amaravati region can write their concerns, suggestions or complaints regarding the ongoing political transition. "Our committee members will further discuss on the queries and suggestions written by the farmers in the forthcoming meetings. The farmers are coming to us and narrating about their problems and we are also considering them." he said.

Rebel Andhra MP Gets Bail, Supreme Court Says May Have Been Ill-Treated