Congress MP Rahul Gandhi tweeted "Sharad Pawar Ji is the latest Opposition leader to be targeted by a vindictive Government". The NCP chief will appear before the Enforcement Directorate today

Sharad Pawar will appear before the Enforcement Directorate in Mumbai today

Sharad Pawar, whose Nationalist Congress Party (NCP) will contest the October 21 Maharashtra election in alliance with the Congress, has been named by the Enforcement Directorate in a money-laundering case along with his nephew Ajit Pawar.

"Sharad Pawar Ji is the latest Opposition leader to be targeted by a vindictive Government. The timing of this action, a month before elections in Maharashtra, reeks of political opportunism," Mr Gandhi tweeted.

Sharad Pawar Ji is the latest Opposition leader to be targeted by a vindictive Government. The timing of this action, a month before elections in Maharashtra, reeks of political opportunism. https://t.co/XCW0GsdXjj

Mr Pawar will appear before the Enforcement Directorate today though he has not been summoned in connection with the case involving loans illegally sanctioned by the Maharashtra State Cooperative Bank. The senior opposition leader said he would appear before the probe agency before he gets busy with the state election.

The Mumbai Police has banned large gatherings near Ballard Estate in south Mumbai, where the Enforcement Directorate's office is located, and also at NCP offices in the city. 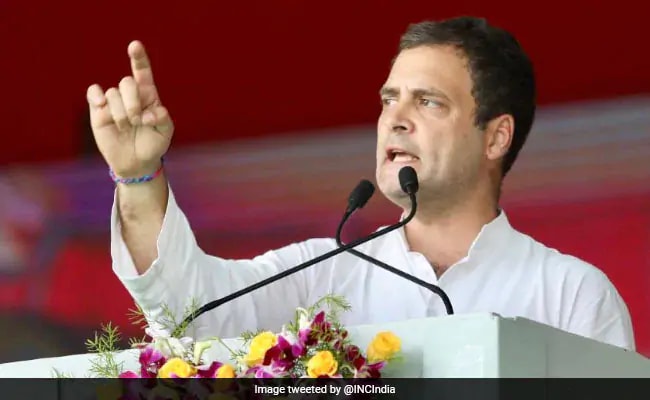 NCP workers staged protests in Mumbai when Mr Pawar was named in the case.

Mr Pawar is not listed as an accused in the First Information Report on the alleged Rs 25,000-crore scam, though the complainant calls him a "kingpin". While a large number of NCP leaders are allegedly involved in the running of the bank, Mr Pawar was not one of them.

The case involves alleged violation of banking laws and Reserve Bank of India (RBI) guidelines while disbursing loans to the state's sugar factories and spinning mills. Many of those who sanctioned the loans were allegedly linked to the owners of the mill owners.

After an order from the Delhi High Court, a case was filed last month by the Maharashtra Police. Later, the Enforcement Directorate started an investigation into possible money-laundering.

The Congress and the NCP have questioned the timing of the case as campaigning peaks for the Maharashtra polls, in which they are pitted against the ruling BJP and the Shiv Sena.

The Congress has also accused the government of targeting its leaders with a political agenda, among them former Union Minister P Chidambaram and Karnataka MLA DK Shivakumar, both in Delhi's Tihar jail in connection with corruption cases.