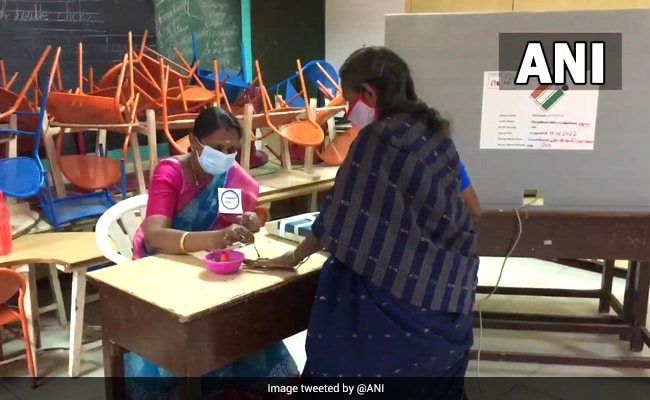 A little over 35 per cent voter turnout was reported in Tamil Nadu urban local body polls, which are being held today after a gap of 10 years. The data was released by the State Election Commission at 1pm. State capital Chennai recorded the lowest turnout of 23.42 per cent, while in Namakkal, 50.58 per cent of the voters exercised their franchise till 1pm.

The voting began at 7am and will end at 6pm.

The voting for the urban local body elections is being held in a single phase. The elections were scheduled in October 2016, but had to be postponed in the wake of the Madras High Court's direction.

According to the Tamil Nadu State Election Commission, voters having Covid-19 symptoms and those who have been infected will be allowed to vote between 5pm and 6pm.

After scoring a hat-trick by winning Lok Sabha, rural local body and assembly elections, Chief Minister MK Stalin is aiming for a fourth consecutive win for his DMK, which is the ruling party in Tamil Nadu.

Ahead of the elections, Stalin reiterated that his government would soon announce the Rs 1000 monthly cash payout for women.

Though it's a local body poll that should focus on local civic issues, this time, however, the DMK has taken up national issues, like federalism and state autonomy.

The opposition AIADMK is targeting the ruling party for not fulfilling its promises made last year.