Calling it unprofessional behavior, the journalist, Lakshmi Subramanian, said it was completely uncalled for to touch a stranger without consent. 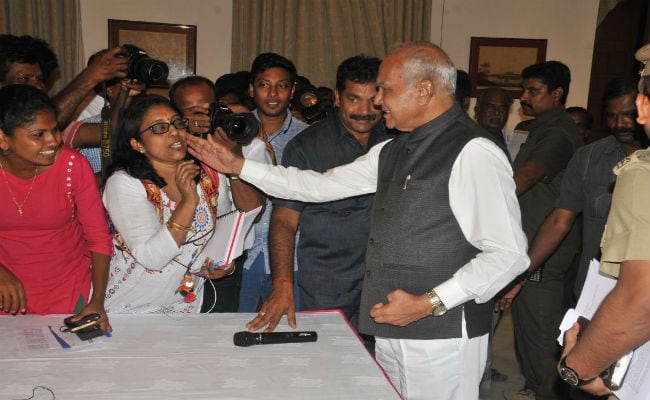 New Delhi: Tamil Nadu Governor Banwarilal Purohit held a press conference on Tuesday evening to clear his name from a controversy surrounding a professor arrested in the 'sex for degrees' case. However, the Governor walked into another row when he patted the cheek of a woman journalist, without her consent, seemingly to dodge her question.

The incident took place when the 78-year-old Governor was about to leave the venue of the crowded press conference at the Raj Bhavan.

The woman journalist, who works with TheWeek, recalled the encounter on Twitter: "I asked TN Governor Banwarilal Purohit a question as his press conference was ending. He decided to patronisingly - and without consent - pat me on the cheek as a reply."

Calling it unprofessional behavior, the journalist, Lakshmi Subramanian, said it was completely uncalled for to touch a stranger without consent.

"This, moments after he dismissed a barrage of questions about allegations of sexual misconduct against himself. Unprofessional behaviour - and completely uncalled for to touch a stranger without her consent, especially a woman," she tweeted.

Washed my face several times. Still not able to get rid of it. So agitated and angered Mr Governor Banwarilal Purohit. It might be an act of appreciation by you and grandfatherly attitude. But to me you are wrong.

Tamil Nadu's opposition party, the DMK, said the incident was "unbecoming" of a person holding a Constitutional post.

DMK Rajya Sabha MP Kanimozhi tweeted "even if the intention is above suspicion, a person who holds a public office has to understand that there is a decorum to it and violating a woman journalist's personal space does not reflect the dignity or the respect which should be shown to any human being."

"It is not only unfortunate, but unbecoming of a person holding a constitutional post," DMK Working President MK Stalin said on Twitter.

Promoted
Listen to the latest songs, only on JioSaavn.com
The Governor had held the press conference after a Nirmala Devi, professor at Devanga Arts College accused of making tacit requests for sexual favours to her students on behalf of officials of the Madurai Kamaraj University, had claimed she knows the Governor, who is the chancellor of the university.