The Assembly elections in Tamil Nadu will be held in a single phase on April 6 and the counting of votes will be done on May 2. 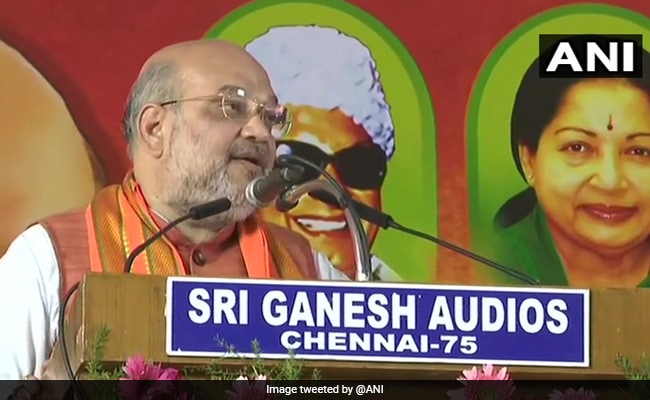 Union Home Minister and Bharatiya Janata Party (BJP) leader Amit Shah on Thursday said that the National Democratic Alliance is going ahead on the path of development whereas United Progressive Alliance (UPA) is on the path of corruption.

Polls will be held for 234 seats in Tamil Nadu with the Congress-DMK and BJP-AIADMK alliance being the major groups contesting against each other.

Mr Shah further said that the Dravida Munnetra Kazhagam (DMK) is not a political party but an "unofficial business organisation", adding that "DMK and congress are not concerned of the people of Tamil Nadu, Sonia Gandhi only thinks of Rahul Gandhi while Stalin is only concerned about Udhayanidhi Stalin."

He also said that BJP's foundation day and polling dates coinciding on the same day are indicative of NDA's election victory.

"Polling dates are not decided by BJP, it is done by Election Commission. They have decided April 6 as the date for Tamil Nadu Election, it is BJP's Foundation Day. That is why NDA's victory is certain here. BJP-AIADMK-PMK will form the government here," he said.

"EPS and OPS have worked a lot for Tamil Nadu, In 5 years, he waived off debts of farmers two times. The two-wheelers scheme was launched and 3.5 lakhs of women got benefitted from it. Every house was provided 100 units of free electricity. The Amma mini-clinics were started," Mr Shah said.

He reminded that the Central Government has also done great good for the people of Tamil Nadu, "In the Union budget, 1,00,000 lakh crores were allocated for National Highways in Tamil Nadu and Rs 63,000 crores for Chennai Metro. Defence corridor in Tamil Nadu is another major initiative and we also worked for an AIIMS in Madurai."

The Assembly elections in Tamil Nadu will be held in a single phase on April 6 and the counting of votes will be done on May 2.