There are reports of friction within Tamil Nadu's ruling AIADMK over the chief minister candidate tag ahead of 2021 polls. 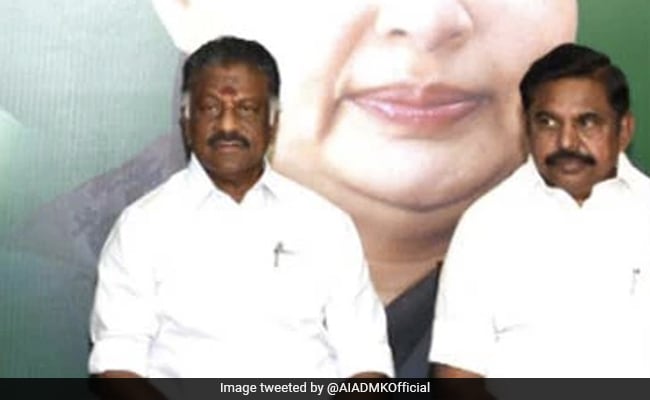 Tamil Nadu Chief Minister and his Deputy have pushed their names for chief minister post in 2021 polls.

The race to become ruling AIADMK's chief minister candidate seems to be gathering pace as party Coordinator and Tamil Nadu's Deputy Chief Minister O Panneerselvam is meeting his supporters at his residence today.

The meeting comes a day after it was decided that Chief Minister Edappadi K Palaniswami and his Deputy Mr Panneerselvam would discuss and jointly announce the party's Chief Ministerial face on October 7.

The Chief Minister and his Deputy are reported to have vociferously pushed their candidacy at Monday's AIADMK executive committee meeting which lasted for 5 hours.

"It's a democratic process in AIADMK. There is freedom of expression in the party," senior leader and Fisheries Minister D Jayakumar said commenting on these developments.

A few weeks ago, posters projecting Mr Panneerselvam as the chief minister candidate for 2021 polls, triggered friction between his loyalists and those backing the Chief Minister. After this, both the leaders, in a letter, had sought unity within the cadre and announced that key decisions will be taken with due consultation.

However, a tug of war seems to have started amid reports of possible early release of ousted AIADMK chief Sasikala Natarajan from jail.

AIADMK's iconic leader, late Chief Minister J Jayalalithaa, had handpicked Mr Panneerselvam to be her stand-in Chief Minister twice when she had to step down following her conviction by court, However his fortunes changed after she died, though he was appointed Chief Minister for the third time.

In 2017, Jayalalithaa's close aide and the then party chief, Sasikala, replaced O Panneerselvam with her loyalist Edappadi K Palaniswami after her bid for the post crashed following conviction in the disproportionate assets case.

However, Mr Palaniswami turned against Sasikala, patched up with his rival and made him the Deputy Chief Minister in the government. Within the party, Mr Panneerselvam became the Coordinator with the Chief Minister as his deputy. The new team ousted Sasikala and her nephew TTV Dhinakaran, who she had announced as No. 2 in the party.

This had an impact on the elections.

The AIADMK, which won a consecutive term in the state, lost Jayalalithaa's RK Nagar assembly seat to Dhinakaran. The AIADMK, which allied with the BJP, lost all seats except one in the last Lok Sabha polls. Dhinakaran, too, who had launched the AMMK party, could not expand his footprint beyond RK Nagar.

Backed by AIADMK leaders from the western part of Tamil Nadu, popularly called Kongu Nadu, the Chief Minister consolidated his position in the party, cabinet and with the centre. The Deputy Chief Minister, however, could not build on the overwhelming support he had received after he was sacked as Chief Minister.

With the AIADMK trying for a third consecutive term, this would be the first election the party would be without an iconic candidate like Jayalalithaa or her mentor MGR. It is not clear if Mr Palaniswami and Mr Panneerselvam would come to a consensus over a Chief Ministerial candidate or would they defer the issue to be resolved after the elections, expected in May.