Taliban Writes To India to Resume Flights To Afghanistan

Afghanistan Crisis: India stopped all commercial flights to Kabul after August 15, when the Taliban swept into the Afghan capital and took control of the war-torn country

The Taliban has written to the DGCA, or Directorate General of Civil Aviation, to ask for the resumption of commercial flights between India and Afghanistan (Kabul).

A letter from the hardline group was sent to the DGCA earlier this month, and is under review by the Civil Aviation Ministry.

Addressed to DGCA chief Arun Kumar, the letter says the Kabul airport - "left damaged and dysfunctional by American troops before their withdrawal" - had become operational with help from Qatar, and that a NOTAM (notice to airmen) in this regard had been issued on September 6.

India had stopped all commercial flight operations to Kabul after August 15, when the Taliban swept into the Afghan capital and took effective control of the war-torn country.

So far only a limited number of aid and passenger flights have been operating out of Kabul.

On September 13 an international commercial flight - a Pakistan International Airlines plane - became the first passenger jet to fly in and out of Kabul in over a month. 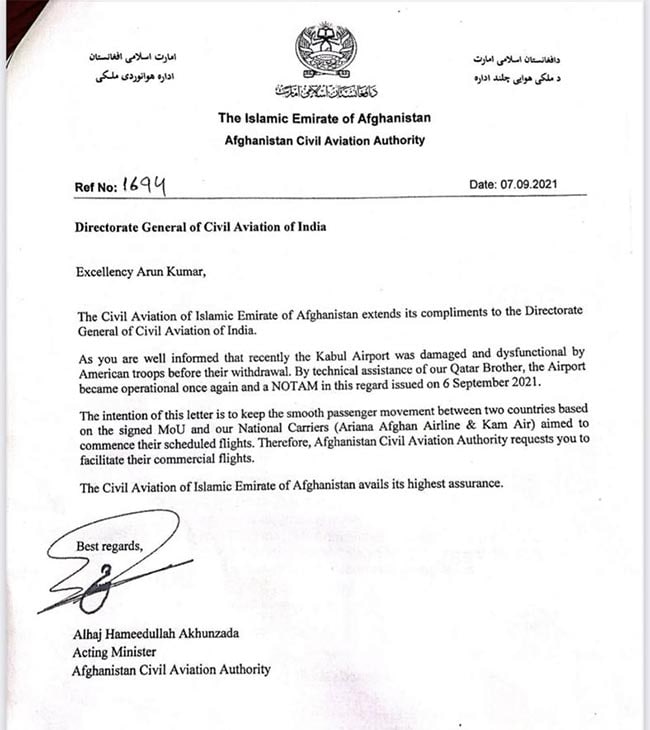 Since then, a few others have begun flying but with ticket prices remain high, Reuters said.

Last week the Taliban appealed to other airlines as well, promising its co-operation and saying that all problems - including "damages" caused by withdrawing Western forces - had been resolved.

"As problems at Kabul International Airport have been resolved and the airport is fully operational for domestic and international flights, the IEA assures all airlines of its full cooperation," he said.

Repairs have been carried out with the assistance of technical teams from Qatar and Turkey, he said.

The IEA is the Islamic Emirate of Afghanistan - the Taliban's term for their new government.

A police officer told news agency AFP he had been called back to work by the Taliban, who claim to have granted a general amnesty to everyone who worked for the previous regime.

After the Taliban's takeover, Kabul airport was flooded by tens of thousands of Afghan nationals desperately looking to flee, as well as foreign nationals and aid workers waiting to be evacuated.

The Indian government operated several such flights - in co-ordination with the Air Force and commercial airlines - bringing back hundreds of citizens, as well as refugees and foreigners.

Heart-breaking scenes were witnessed at the height of the evacuation process, including the sight of a US Marine lifting a baby over a razor wire-topped wall at the airport.

The airport was also attacked by suicide bombers who struck at one of its gates, killing at least 60; video shot by locals showed dozens of bodies strewn around a canal on the edge of the facility.

ISIS claimed responsibility for the attack.

With input from AFP, ANI, Reuters