Sushma Swaraj was also one of the first to welcome the International Court of Justice's (ICJ) recent verdict, restraining Pakistan from executing Kulbhushan Jadhav. 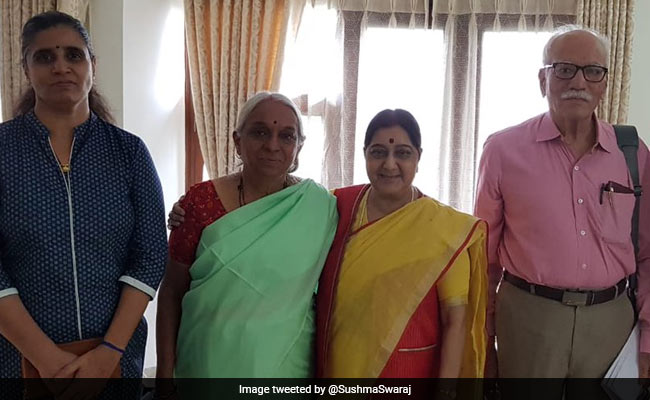 Former External Affairs Minister Sushma Swaraj, who was leading efforts during her term to get consular access to Kulbhushan Jadhav who is lodged in a Pakistani jail, on Thursday met the family of the former naval officer.

"Kulbhushan Jadhav's family came to see me today. I wish them all the best," she tweeted on Thursday.

The former minister had been in close touch with the family during her tenure in the external affairs ministry and closely worked with officials and the legal team to get access to Jadhav in Pakistan.

She was also one of the first to welcome the International Court of Justice's (ICJ) recent verdict, restraining Pakistan from executing Jadhav.

"I wholeheartedly welcome the verdict of International Court of Justice in the case of Kulbhushan Jadhav. It is a great victory for India," Swaraj had tweeted.

She had also thanked Prime Minister Narendra Modi for taking the case to the ICJ and lawyer Harish Salve for presenting case in the ICJ effectively and successfully.