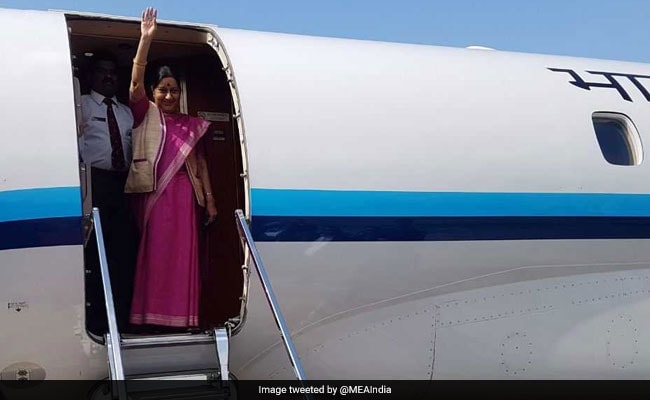 Dhaka: External Affairs Minister Sushma Swaraj arrived in Dhaka today on a two-day visit to attend a joint consultative committee meeting to review bilateral ties between India and Bangladesh. Ms Swaraj, who arrived on a special aircraft, was received by her Bangladesh counterpart AH Mahmud Ali at Bangabandhu Air Base in Dhaka. Officials said the Teesta river deal and the Rohingya crisis were among issues likely to be discussed in Ms Swaraj's talks with Mr Ali.

She is "expected to meet the Bangladeshi leadership and also interact with the representatives of leading Bangladeshi think-tanks, chambers of commerce and industry and cultural organisations," an Indian High Commission statement said.

Ms Swaraj is likely to join the signing of two memorandums of understanding (MoUs) for setting up a "common facility centre" for small and medium enterprises in southwestern city of Khulna and export of hi-speed diesel to Bangladesh, the officials said. She will also inaugurate 15 development projects funded by the Indian government.

This is Ms Swaraj's second visit to Bangladesh and comes after the recent trip of Finance Minister Arun Jaitley during which India operationalised a $4.5 billion line of credit to Bangladesh to enable implementation of development projects in key areas, including power, railways, roads and shipping.

The announcement of the line of credit was made during the visit of Prime Minister Hasina to India in April. The development was also seen as India's attempt to counter increasing Chinese influence in Bangladesh, where Beijing is trying to make inroads in infrastructure ventures.
Comments
Sushma SwarajBangladeshRohingya