Rhea Chakraborty has denied the allegations levelled by the Narcotics Control Bureau that she is an active member of a "drug syndicate". 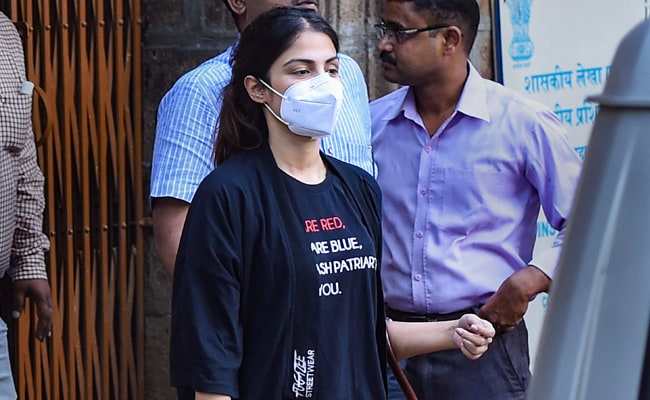 Rhea Chakraborty is currently housed at the Byculla Jail in Mumbai.

The Mumbai unit of the Narcotics Control Bureau, probing drugs angle in the actor Sushant Singh Rajput death case, has taken five people into custody and seized 928 gm charas and cash after raiding the residence of one of them, the anti-drug agency said.

A team led by Samir Wankhede, Zonal Director of the NCB, detained one of the suspects from Versova on Thursday after acting on information provided by an accused who was arrested in connection with the drugs probe linked to the Sushant death case, it said.

"On revelation of Ankush Arenja in his statement under section 67 that Rahil Rafat Vishra, alias Sam, had supplied Charas to Ankush Arenja, a total of 928gms of Charas and Rs. 4,36,000 in cash has been seized from the house search of said Rahil Rafat Vishra. Further investigation is under progress," the Narcotics Control Bureau (NCB) said in a statement.

The arrests have been made in the same case (case number NCB MZU Cr. No. 16/2020) in which actor Rhea Chakraborty and her brother Showik have been arrested on charges of allegedly financing the procurement and supply of drugs to actor Sushant Singh Rajput, who died on June 14 this year.

Rhea Chakraborty is currently housed at the Byculla Jail in Mumbai. Her bail plea has been rejected by a special court for anti-drugs cases and she is likely to apply for bail in the High Court soon.

Rhea Chakraborty has denied the allegations levelled by the NCB that she is an active member of a "drug syndicate".

The anti-drug agency initially filed a case (case number NCB MZU Cr. No. 15/2020) against Ms Chakraborty after Enforcement Directorate claimed that the actor's phone records showed that she was in touch with drug peddlers. But later investigations connected Rhea Chakraborty and her brother Showik to drug peddlers in another case (case number NCB MZU Cr. No. 16/2020) that was registered following the arrest of Abbas Ramzan Ali Lakhani and Karan Arora.

The investigations in the first case were to begin with the questioning of Sushant Singh Rajput's former manager Shruti Modi and film industry talent manager Jaya Saha.

However, their questioning was put on hold after one of the team members that was assigned to the case contracted COVID-19.