Court Order On Farm Laws Against Centre, But Acceptable To All: Minister

Kailash Choudhary said he is confident that whatever decision is taken by the court, that will be "taken to ensure that the laws are kept the way they are." 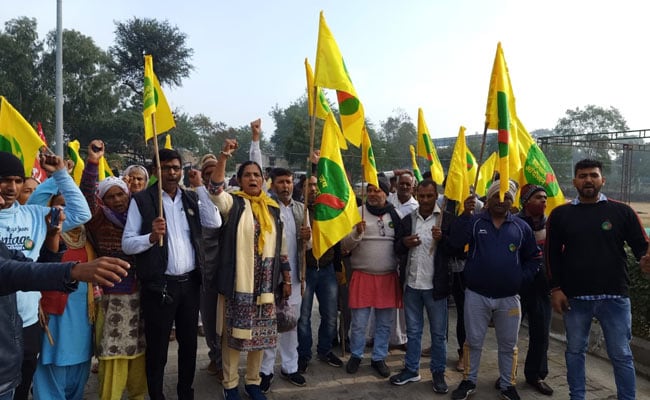 The Government on Tuesday said the Supreme Court order to stay implementation of three new farm laws is against its wish but the direction of the top court is ''sarva-manya'' (acceptable to all) and welcomed the composition of an "impartial" committee to resolve the deadlock.

In an interview with PTI, Minister of State for Agriculture Kailash Choudhary also said the government is always ready for talks but it is up to farmer unions to decide whether they want to go ahead with the scheduled ninth round of talks on January 15.

Mr Choudhary, an MP from Rajasthan, further said he is confident that whatever decision is taken by the court, that will be "taken to ensure that the laws are kept the way they are."

"The Supreme Court order is against our wish. We want the laws to continue. However, the order is "sarva-manya" (acceptable to all)," the minister said.

Earlier in the day, the court stayed the implementation of the three contentious laws till further orders and set up a four-member committee to resolve the deadlock between the Centre and the farmer unions protesting at Delhi's borders over the legislations.

Agitating farmer unions, however, said they want nothing less than a complete repeal of the laws and said they will not appear before the panel and continue their agitation.

Addressing a press conference at Singhu Border, union leaders alleged the members of the committee are "pro-government".

In the first official reaction from the government on the court order, Mr Choudhary said, "We welcome the Supreme Court order. Definitely, an impartial committee has been formed which will take the opinion of all farmers and experts across the country."

He further said the panel will prepare a report after taking everyone's views, based on which the Supreme Court will take a decision.

"New laws have been framed in the interest of farmers. These legislations will make farmers self-reliant in the coming days," the minister said.

Asked if the government will continue the talks with protesting farm leaders on January 15, he said, "We are always ready for discussion. Now, farmers'' leaders have to decide what they want to do."

"We have not yet reached any conclusion yet, but we are always ready for a dialogue," Mr Choudhary said.

Asked whether those farmers who have already taken advantage of the new laws will be protected in the wake of the court order, the minister said, "Crores of farmers are benefitting from the new laws. There have been smiles on their faces. Those farmers need not worry as I am confident that the Supreme Court will decide on this issue very soon."

Farmers who are benefiting from the laws will also wait for the court decision and the new reforms will definitely reach crores of farmers in coming days, he asserted.

"The Government of India is committed to the interests of farmers. The government will take care and ensure no injustice is done to farmers who have entered into contracts as per the new law," he said.

"The government is standing with farmers and it will ensure no injustice is done to them. This is the government''s commitment," he added.

Thousands of farmers, mostly from Haryana and Punjab, have been protesting at several border points of Delhi since November 28 last year, demanding the repeal of the three laws and a legal guarantee to the minimum support price (MSP) system for their crops, among other demands. The government has dismissed these apprehensions as misplaced.

The four members of the committee formed by the Supreme Court -- two experts and two farmer leaders -- have been known as pro-reforms in the agriculture space, but the main opposition party Congress and agitating unions flagged their direct support for the contentious Acts as well in the recent past.