Mumbai: RJ Malishka has found widespread support after the issue of potholes, which leaves Mumbaikars frustrated every year, was highlighted by her in a video that went viral. Ms Malishka has promised more of the same in a tweet. The radio jockey, now the heroine of the 'anti-pothole movement' and currently in the US, says she has six more songs on the way while taking another jibe at the Brihanmumbai Municipal Corporation or BMC.

Her FM channel came out with yet another video, this time from a flooded portion of a road asking the civic body not to stifle the voice of the radio jockey by threatening legal action.

The BMC found itself on the receiving end of public anger in spite of multiple clarifications that areas like the Western Express Highway do not come under the jurisdiction of the civic body. People who put up with potholes every year targeted not just the BMC but also the ruling party, Shiv Sena, which is in alliance with the BJP.

At Tulsi Pipe Road, just as one gets of Dadar station flyover, potholes had formed on a recently-repaired road. Being a major road and an approach to Lower Parel, which houses many offices, these potholes have been causing major traffic jam for the past one week. At several locations, men were seen repairing potholes that had appeared after the recent spell of heavy rain. 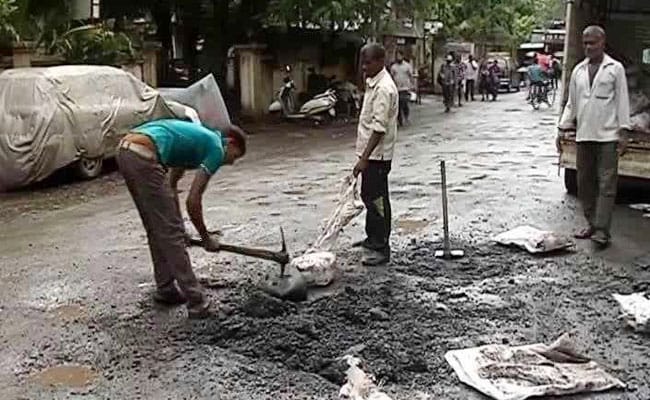 Municipal corporation workers fill up potholes on a road in Mumbai

"This road was repaired a few days ago. It's not even a month and the road is bad again," said Milind Kesarkar, a resident, alleging that corrupt contractors were responsible for poor quality of repairs. Thousands of crores of rupees have been spent year after year on road repairs in Mumbai, but people are still putting up with bad roads that make commuting a nightmare, a resident alleged.

With a metro rail being constructed, the situation has been made worse for those who have to navigate Mumbai's traffic. In areas like Pratikshanagar in Sion, several potholes that had been troubling citizens were filled up as there was some respite from the continuous rain.

Apart from the BMC, agencies like the Mumbai Metropolitan Region Development Authority and the Maharashtra State Road Development Corporation Limited, which are responsible for maintaining arterial roads, have failed Mumbaikars again and again.

"The car breaks down. The suspension gets damaged. Tyres get damaged regularly," a driver who drives on the highway everyday told NDTV.

The Shiv Sena, which has also faced a share of the anger over bad roads, alleged the radio jockey was misleading citizens and playing the victim card after some Shiv Sena leaders wanted the BMC to seek damages to the tune of Rs 500 crore through a legal suit.

Promoted
Listen to the latest songs, only on JioSaavn.com
The party said a notice was served in the name of the resident of an apartment where dengue mosquito larvae was found during routine inspection, but Ms Malishka seems to be using that for publicity instead of apologising for including railways and traffic while ridiculing the BMC, when the BMC has nothing to do with managing these services in the city.

"The administration is functioning normally. When you point fingers at someone, four fingers are pointing back at you. You should know this," said Yashwant Jadhav, Shiv Sena leader in the BMC house.