Ravi Shankar Prasad said that as national parties, the Bharatiya Janata Party and the Congress cannot have two sets of standards in dealing with women and their rights. 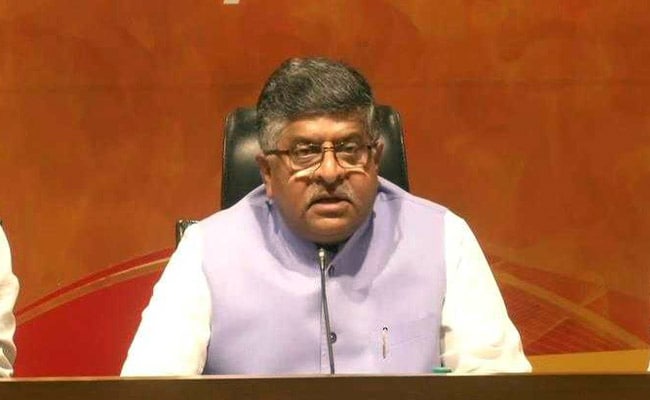 A day after Congress President Rahul Gandhi sought the Prime Minister''s support for the passage of the Women''s Reservation Bill, Union Law Minister Ravi Shankar Prasad on Tuesday asked him to support the proposed law to prohibit "triple talaq" and "nikah halala".

The Congress party said rather than being a Minister, the Law Minister has turned into a dealer for cutting a deal between two legislations.

He said that as national parties, the Bharatiya Janata Party (BJP) and the Congress cannot have two sets of standards in dealing with women and their rights.

In a letter to Mr Gandhi, which was released to the media, Mr Prasad said: "As part of the new deal, we should approve, in both Houses of Parliament, the Women''s Reservation Bill, the law prohibiting triple talaq and imposing penal consequence on those who violate the law, and prohibiting nikah halala."

Under the triple talaq practice, a Muslim man can instantly divorce his wife by orally repeating the "talaq" thrice. As per "nikah halala", a divorced has to marry someone else and consummate this marriage to get a divorce and remarry her earlier husband.

Mr Prasad''s letter came a day after Gandhi wrote to Prime Minister Narendra Modi to seek his support for the passage of the Women''s Reservation Bill in Parliament''s monsoon session starting on July 18, claiming that the BJP appears to have had second thoughts on the proposed law even though it was a key promise in its 2014 manifesto.

"As national parties, we cannot have two sets of standards in dealing with women and their rights. We are already too late in conferring the right of adequate representation, equality in personal laws and doing away with such provisions which compromise women''s dignity," Mr Prasad said.

The BJP leader also targeted the Congress chief over lapsing of the Women''s Reservation Bill with the dissolution of the last Lok Sabha.

"The bill was originally proposed by the National Democratic Alliance (NDA) government headed by Atal Bihari Vajpayee but could not be passed for want of a consensus in Parliament.

The Minister said that the Modi government welcomes Mr Gandhi''s initiative to support the bill. "However, the government would like to understand fully the reasons why the bill was not taken up for three years by the UPA government in the Lok Sabha and allowed to lapse."

Congress spokesperson Sushmita Dev hitting out at Mr Prasad said: "It is extremely unfortunate that the Law Minister has turned into a dealer, rather than a Minister. I am shocked to see that he tries to cut a deal between two legislations, both of which impact women."

"I would like to ask Ravi Shankarji that when BJP scripted its manifesto in 2014, it had no mention of ''triple talaq'' and ''halala'', but did emphatically mention that 33 per cent reservation for women in the Lok Sabha and assemblies will be brought."

"Prasad has established beyond doubt that Prime Minister Modi in the manifesto of the BJP lied to the women. Prasadji has proved that his knowledge on empowerment of women is zero. Their politics when it comes to women empowerment is nothing but a gimmick."

On supporting the Triple Talaq bill, she said: "Even before Supreme Court judgment came banning instant ''triple talaq'', the Congress had taken a stand that we will welcome any progressive law. The bill that was brought to the Lok Sabha passed and is now pending in the Rajya Sabha."