The encounter started at 8 am on Tuesday between the elite Cobra forces, specially trained to tackle Maoist insurgency, in Kistram area of Sukma. 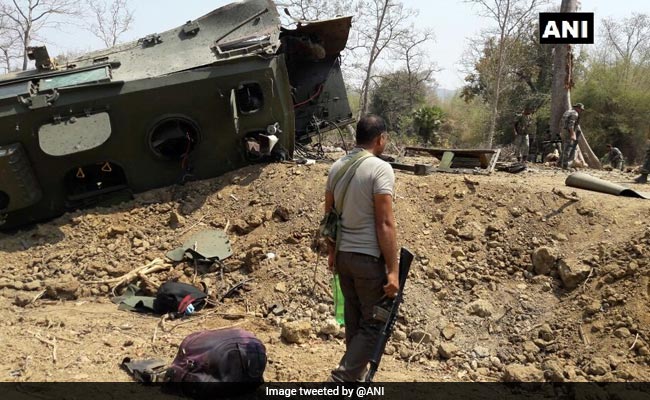 Four CRPF personnel have also been injured in the attack (Representational)

New Delhi: Eight personnel of the Central Police Reserve Force have died after Maoists blew up a mine protection vehicle or MPV, in Sukma district of Chhattisgarh.

Four CRPF personnel have also been injured in the attack.

Some jawans were also reported to be injured in the explosion, but there was no official confirmation yet, an official told news agency PTI.

The encounter started at 8 am on Tuesday between the elite Cobra forces, specially trained to tackle Maoist insurgency, in Kistram area of Sukma.

Here are the highlights from the attack in Sukma, Chhattisgarh:

Mar 13, 2018 21:13 (IST)
Prime Minister Narendra Modi said the country salutes the nine CRPF personnel and stands shoulder to shoulder with the families of the bravehearts.

India salutes the brave @crpfindia personnel who were martyred in the attack in Sukma, Chhattisgarh.

My thoughts are with the families and friends of the brave martyrs. The nation stands shoulder to shoulder with them in this hour of grief.

Mar 13, 2018 18:25 (IST)
Sukma, considered one of the worst insurgency-hit regions of the state, has witnessed several dreaded attacks on security forces in the past, particularly in summer season during which rebels carry out an annual tactical counter offensive campaign.
Mar 13, 2018 18:24 (IST)
Those killed have been identified as Assistant Sub Inspector R K S Tomar, Head Constable Laxman and constables Ajay K Yadav, Manoranjan Lanka, Jitendra Singh, Shobhit Sharma, Manoj Singh, Dharmendra Singh and Chandra H S. The injured are Madan Kumar and Rajesh Kumar: news agency PTI.
Mar 13, 2018 18:23 (IST)
Officials said the Maoist cadre led by elusive Naxal commander Hidma and his PLGA (Peoples Liberation Guerrilla Army) battalion no 1 could be behind the deadly attack.
Mar 13, 2018 18:23 (IST)
The armoured MPV had gone about 10-feet into the air and crashed on the ground before splitting into pieces. All the personnel were killed due to the impact of the blast even as many were thrown out of the vehicle, officials told PTI.
Mar 13, 2018 18:22 (IST)
Over 50 kgs of explosives were used in the attack which took place around 12.30pm along the 5-km under-construction Kistaram-Palodi road.
Mar 13, 2018 16:40 (IST)
D M Awasthi, Special DG Naxal Operations, also expressed grief over the incident.

Nine people have died in the attack, the injured are being brought to Jagdalpur or Raipur. It is really unfortunate that we lost these brave men: DM Awasthi, Special DG Naxal Operations on Sukma attack. pic.twitter.com/vKmlA3VtOa

Mar 13, 2018 16:16 (IST)
Earlier this month at least 10 suspected rebels and one police officer were killed in a firefight deep in Chhattisgarh when hundreds of commandos staged a pre-dawn assault on a hideout.
Mar 13, 2018 15:44 (IST)
West Bengal Chief Minister Mamata Banerjee also tweeted her condolences.

Deeply saddened at the news coming from #Sukma. Lives of at least nine CRPF jawans lost. My heartfelt homage to all the martyrs. Strength to their families. Jai Hind

Mar 13, 2018 15:26 (IST)
Earlier in the day, Maoists had staged a similar attack but they fled after the CRPF personnel retaliated the fire.

Mar 13, 2018 15:03 (IST)
The injured personnel are being evacuated by a helicopter to Raipur, the CRPF official told IANS.
Mar 13, 2018 14:56 (IST)
Home Minister Rajnath Singh tweeted condolences to the families of the deceased in the attack and wished for speedy recovery of the injured jawans.

My heartfelt condolences to the families of those personnel who lost their lives in Sukma blast. I pray for the speedy recovery of the injured jawans. I spoke to DG @crpfindia regarding the Sukma incident and asked him to leave for Chhattisgarh.

Mar 13, 2018 14:51 (IST)
A CRPF patrolling party was on its way from Kistaram to Palodi, in an anti-landmine vehicle, which was targeted by Maoists, said DM Awasthi, Special Director general, Anti-Naxal Operations. More forces have reached the spot.
Mar 13, 2018 14:51 (IST)
The encounter started at 8 am on Tuesday, between the elite Cobra forces, specially trained to tackle Maoist insurgency, in Kistaram area of Sukma, where an anti-Naxal operation was already going on. 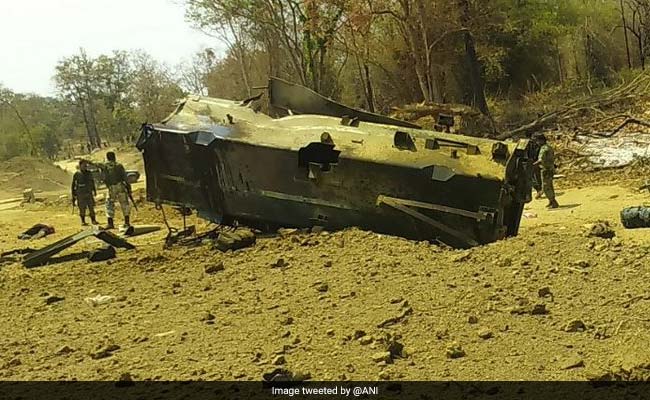 #FLASH Eight personnel of CRPF's 212 bn lost their lives in an IED blast by Naxals in Kistaram area of #Chhattisgarh's Sukma. pic.twitter.com/pg0Z5E53qb

He also added that einforcement was rushed to the spot and further details were awaited.
Mar 13, 2018 14:40 (IST)
The paramilitary security personnel, belonging to the 212th battalion, were conducting an area-domination operation in the forest of Kistaram when the Maoists blew up the CRPF's mine-protected vehicle, an official told news agency PTI.

Mar 13, 2018 14:38 (IST)
The blast occurred when a team of CRPF's 212th battalion was patrolling in a forest in Kistaram area of Sukma, located around 500 kms from the state capital ranchi, a paramilitary official told PTI.
Mar 13, 2018 14:37 (IST)
Suspected Maoists blew up a mine-protected vehicle of the CRPF in Chhattisgarh's Sukma district, killing eight and injuring others.
CRPFSukma attack8 CRPF personnel dead