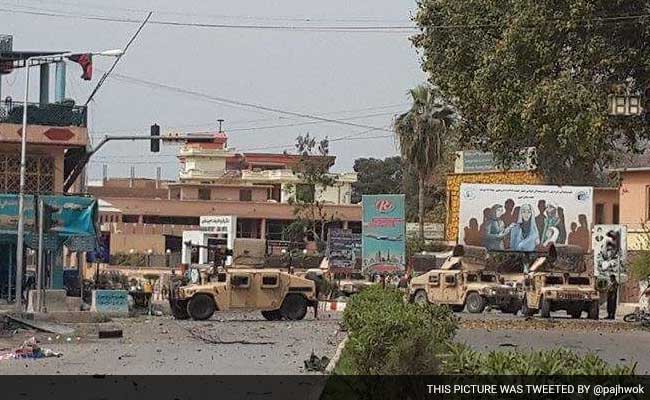 The strike follows a suicide attack on the nearby Pakistani consulate in Jalalabad in January.

Jalalabad: Explosions and heavy gunfire erupted near the Indian consulate in Afghanistan's Jalalabad this afternoon. A suicide bomber blew himself up and four more attackers were killed by Afghan forces.

One civilian has been killed and 14 others have been injured. All Indians are reported to be safe.

A grenade was reportedly thrown inside the compound of the consulate around noon.

As gunfire rang out, security forces in armoured vehicles were seen moving to the scene while civilians fled.

The Indo-Tibetan Border Police (ITBP), which guards the consulate, and Afghan security forces  engaged in a fierce gunbattle with the terrorists who fired from a nearby guest house.

The blast shattered windows and doors in nearby buildings and destroyed at least eight cars, according to witnesses.

No one has claimed responsibility for the attack, which comes after another terror attack on the nearby Pakistani consulate in January. That attack was claimed by ISIS, which has a growing presence in Nangarhar province, of which Jalalabad is the capital.

In January, the Indian consulate in the northern Afghan city of Mazar-i-Sharif was also attacked by terrorists.