The 1,500 kg bus can accommodate up to 15 people and can be used inside closed campuses. The on-road version will come later 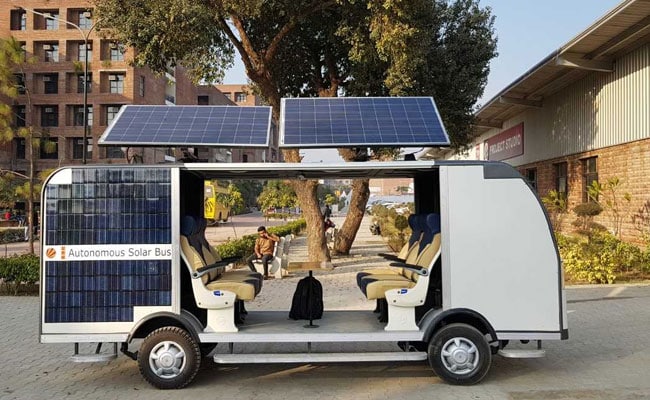 About 300 students and 5 faculty members fabricated the bus at a workshop within the university.

Indian researchers have unveiled a first-of-its-kind bus -- an autonomous vehicle powered by solar energy. Globally, most autonomous vehicles developed till date are powered by petrol, diesel, CNG or charged using grid-based electricity. Therefore, this Indian innovation has a double advantage.

The bus can run for 70 km on a single charge. The prototype has been made on an entirely new chassis and has cost only Rs 15 lakh.

The bus is charged using solar panels that line the vehicle. They can generate two kilowatts of power and help charge the six lead acid batteries.

"This is a driverless bus and it will run automatically sensing the road and its surroundings. It can cover infinite distances as it is a solar bus and the sun is continuously charging the batteries. Without continuous charge, it can run 70 km in one charge. In 2014, we had developed a driverless golf cart and then some time last year, we thought why not develop a system or a bus which does not depend on petrol, diesel or electricity. This project took a year," Mandeep Singh, Project Leader, Autonomous Bus, Lovely Professional University, Phagwara, said.

About 300 students and five faculty members fabricated the bus at a workshop within the university.

Muskan, a student of the university, said, "I have helped in the technical background, in which I use some of the sensor flow so that the bus can see its own path and move accordingly."

Talking about the dangers posed by self-driving vehicles, Muskan said, "I have given data on accidents so that it can learn from the previous data and act accordingly."

The 1,500 kg bus can accommodate up to 15 people and can be used inside closed campuses. The on-road version will come later.

Will this project pose any challenge to the autonomous car developed by Google and Elon Musk of Tesla?

"Not right now. They have expertise at Tesla. We can't compete with them at this stage, but I will not hesitate to say that in the coming years we will be among their competitors," Mandeep Singh said.