Sukanta Majumdar's charge was sharply countered by the Trinamool with party leader Tapas Roy saying, the BJP's new state boss was "as uncouth as old one". 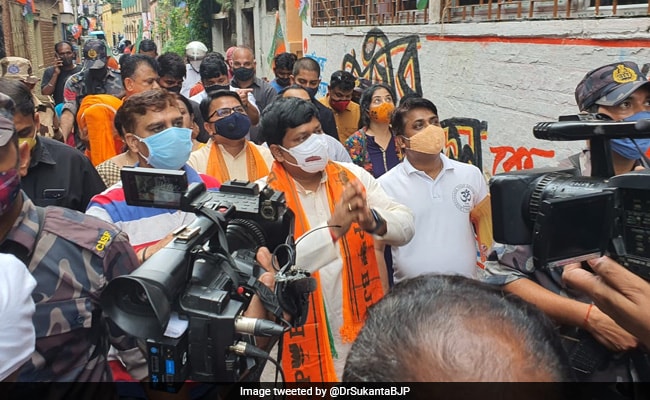 Sukanta Majumdar was campaigning for the BJP's candidate for the Bhabanipur by-polls.

On the very second day of his job, the BJP's new Bengal chief had a run-in with the police as he campaigned in Kolkata's Bhowanipore area for his party's candidate who is contesting a by-poll against Chief Minister Mamata Banerjee in her neighbourhood.

"West Bengal Police Service has become West Bengal 'Pishi' Service," Sukanata Majumdar told the media, using the Bengali term for aunt that the BJP uses to taunt Mamata Banerjee with charges of nepotism over promoting her nephew Abhishek Banerjee in the party.

The police, however, said the Chief Minister's residence falls under a high-security area and the BJP leader had too many people with him.

The Trinamool reacted sharply to the charge with party leader Tapas Roy saying, the BJP's new state boss was "as uncouth as old one".

Known for frequent controversial comments and coarse language, BJP's Bengal unit chief Dilip Ghosh was replaced late on Monday and given a position in the national leadership, in a reshuffle that came amid a string of defections from the party to the ruling Trinamool Congress.

BJP's MP from Balurghat in north Bengal, 41-year-old Sukanta Majumdar was asked to take over as the Bengal unit chief.

Since the Bengal Assembly elections earlier this year in which the BJP had said it was going to win 200 seats but got only 77, four MLAs and an MP have returned to Trinamool.

On Wednesday, he was campaigning for Priyanka Tibrewal, a 41-year-old lawyer at the Calcutta High Court, who will contest against Mamata Banerjee in the September 30 by-polls for the Bhabanipur constituency.

Mamata Banerjee, who took charge as Chief Minister for the third time after the Trinamool Congress's mega victory in the state election, needs to win the Bhabanipur by-poll as an MLA to retain the top post. The results will be out on October 3.

She had lost to her former aide-turned-rival Suvendu Adhikari in Nandigram even though the Trinamool managed to improve its previous tally by two seats to 213 out of 294.

The Bhabanipur poll is seen as extremely critical for the BJP, which is heavily invested in defeating Mamata Banerjee after it failed to oust her in the state polls.