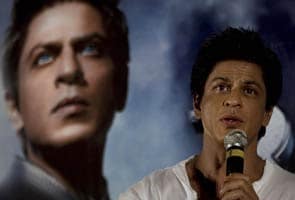 Indore: Bollywood actor Shah Rukh Khan today said that Baba Ramdev's proposed hunger strike against corruption and repatriation of black money stashed in foreign banks is politically motivated and he would not support the agitation.

"Koi support nahin karunga...unka agenda hai...jaise hi koi neta ho jata hai...voh yeh sab karne lagata hai (I will not support him...he's got an agenda...as soon as one becomes a leader...he resorts to such kind of agitation)," Shah Rukh told reporters at the release of a theatrical trailer of his upcoming flick "Ra.One".

In the background of the 2G scam and related issues, the actor said current instances of corruption in public life have saddened him.

When asked whether he wanted to become a politician, Shah Rukh denied it saying, "Why do you think I am joining politics, why don't you imagine a neta joining film industry? I am a selfish person who wants to be admired by his fans and well-wishers in Bollywood and in public at large," he said adding he does not understand politics.

The superstar said that honest human beings are the sources of his inspiration, adding that mythological characters like Krishna, Drona and even Raavan stood in a different stead because of their control over mind and willpower.

Promoted
Listen to the latest songs, only on JioSaavn.com
When asked whether he would pair up with Salman Khan in any movie, the actor said, "You should ask me whether I will be seen with female actresses like Katrina Kaif, Kareena Kapoor etc...why do you want to fix me with a male actor." As part of the promotional strategy for his upcoming film 'Ra.One', Shah Rukh launched a 3,600-feet-long fan mail which will travel through 50 BIG Cinemas properties across India thus allowing audiences to share their messages for the actor.