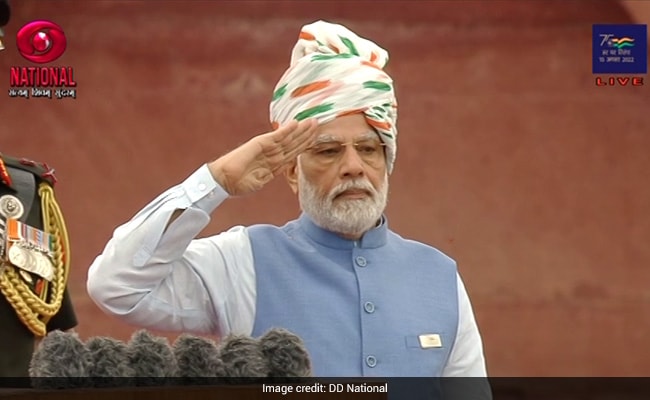 In a first, the government has also allowed people to display the flag at their homes for three days.

Keeping up with tradition with his distinctive sartorial choices during his customary address to the nation on Independence Day from the Red Fort in Delhi, PM Narendra Modi was today spotted wearing a white turban with stripes of the tri-colour Indian flag. Speaking for the ninth consecutive time at the occasion from the iconic heritage building, he was clad in a white kurta-pyjama and a navy blue waistcoat, with the turban clearly standing out.

The Prime Minister is known for his tradition of donning colourful turbans for his Independence Day and Republic Day looks since 2014. Last year, he wore a saffron turban with red patterns and a long pink trail.

For his maiden Independence Day in 2014, he had opted for a bright red Jodhpuri bandhej turban. The next year, he chose a yellow turban with multi-coloured criss-cross lines.

The Prime Minister's turban for 2017 was a mix of bright red and yellow with crisscrossed golden lines all over. He donned a saffron turban for his appearance at the Red Fort in 2018.

PM Modi had donned a tie and dye turban in hues of pink and yellow on Independence Day celebration in 2016.

India is marking 75 years of Independence today, with the PM leading the celebrations. He unfurled the national flag and is addressing the nation from the ramparts of the iconic Red Fort.

The tri-colour has featured heavily in this year's special celebrations with the government promoting the "Har Ghar Tiranga" campaign with the aim to make the relationship with the national flag a more personal one rather than just keeping it formal or institutional. Several "Tiranga Yatras" have also been taken out across the country by ministers and BJP leaders.

The celebrations for 75 years of Independence are being marked by a mega programme, the Azadi ka Amrit Mahotsav, which started in March 2021.

In a first, the government has also allowed people to display the flag at their homes for three days. The flag laws had to be tweaked for the "Har Ghar Tiranga" campaign.