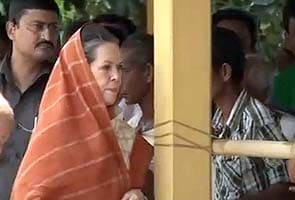 New Delhi: Sonia Gandhi today will visit the family of a Dalit girl who burned herself to death after being gangraped in Haryana's Jind district. Haryana has been rocked by a series of 11 rapes in the last one month.

On Tuesday, the Haryana Congress chose to call the rapes a "conspiracy to malign the government". The Congress is in power in the state, where the series of rapes, mostly of Dalit women, has given the government some very bad press. The state's Congress chief Phool Chand Mulana said, "Such incidents used to happen earlier as well," claiming that the incidents were being sensationalised by the media.

Under pressure, the Congress government in Haryana led by chief minister Bhupinder Singh Hooda says the police is "cracking down", but is under criticism for doing too little, too late. Most the victims have been Dalits and some, minors.

The controversy was further compounded when the khap panchayat - a body of elders which controls social norms and traditions in rural Haryana - of Rohtak, the chief minister's home district, said that the sexual assaults could be stopped if boys and girls got married earlier.

"When girls and boys go through puberty, they start having sexual desires which attract them to do unethical things. These things can also lead to rape, which is why I think there shouldn't be an age limit to marriage. When a girl is young, and a boy is young, they should just get married," a khap panchayat member in Meham in Rohtak, told NDTV. Some khap members also blamed television and films for their "bad influence".

Even while these kinds of bizarre logic and justification were being handed out, another woman was raped in Palwal's Mathepur village when she went to the fields to collect fodder. This is the fourth rape case in Palwal in the last 15 days.

The incident is the latest in a string of cases of crimes against Dalit women in Haryana. Last month, a teenage Dalit girl was allegedly raped by a group of 12 men in Hisar. The accused also filmed the incident on a cellphone and circulated the MMS. Unable to cope with the situation, the girl's father killed himself.

For five days, his body was at the mortuary of a local hospital, while the villagers protested against police inaction for almost a month. The victim and her mother refused to take his body from the morgue, saying they will claim it only when they get justice. This finally forced the police to take action.

But the fact that it took his death to propel the police into registering a case of rape is a grim reflection of the condition of Dalits in the state.

On October 4, a newly-married woman registered a complaint, saying she was allegedly abducted and gangraped by four men at Banwasa village under Gohana sub-division in Haryana's Sonipat district, 200 km from Chandigarh.

In another incident, a 13-year-old girl was allegedly raped by her 45-year-old neighbour in Rohtak, just 70 km from Delhi on Wednesday evening.

In the same area, a minor, mentally-challenged Dalit girl was also allegedly raped. The 15-year-old victim was allegedly lured by three women relatives in Kachchi Garhi Mohalla colony of Rohtak and then raped by a man in an abandoned house.

Last week, a teenaged girl was gang-raped by four men in Gohana town in the Sonipat district.
Comments
Sonia Gandhi