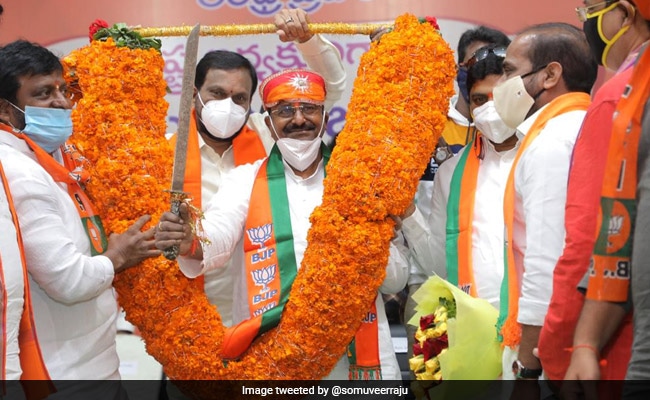 Somu Veerraju thanked all leaders who supported him as party president

"Ruling and opposition parties in the state are family-centric parties. BJP is the appropriate alternative for the people. BJP can fill the political vacuum in the state effectively. We will do politics in a constructive manner," said Mr Veerraju while speaking to ANI.

"Andhra Pradesh is a good state with ample resources. We will work to improve infrastructure and make it as Swarna Andhra. Ours is a national and not a family party. We have a strong agenda keeping the nation in mind," he added.

Mr Veerraju thanked all leaders who supported him as party president.

"Andhra Pradesh has good natural resources and talented human resources. They should be effectively used for the overall development of the state. Poor people should get the fruits of development. For that BJP should come to power. We will work together with Jana Sena Party (JSP) to come to power in Andhra Pradesh in 2024 assembly elections," he said.

On the issue of three capitals bill, Somu Veerraju said that the decision on capital is in the hands of state government and the centre has nothing to do with it.