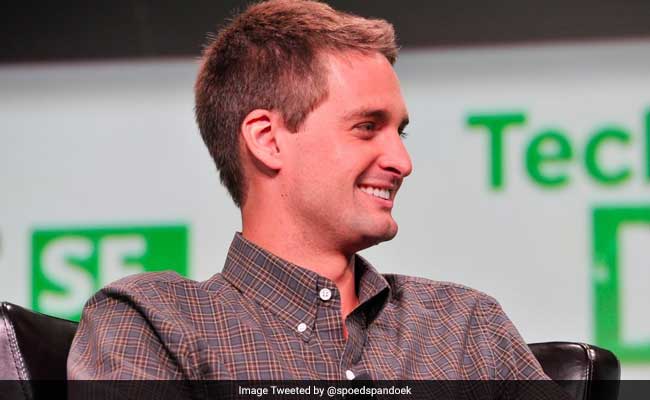 New Delhi: A former Snapchat employee has alleged that the social media company's chief executive officer Evan Spiegel was disinterested to expand the business to "poor countries" like India. American news website Variety quoted the ex-employee, Anthony Pompliano, as saying that Spiegel told him that the popular app is "only for rich people", which has led to severe backlash in India.

According to the Variety report, Mr Pompliano - who has also worked at tech giant Facebook - was in a meeting with the Snapchat CEO to discuss and propose ideas for global outreach and growth of the application when he was "abruptly" interrupted by Mr Spiegel.

"The app is only for rich people. I don't want to expand into poor countries like India and Spain," Mr Spiegel reportedly told Mr Pompliano.

These allegations are contained in Mr Pompliano's lawsuit, filed at a US court in January. According to the lawsuit, the former employee also claims that Snapchat inflated user data and "completely misinformed about key metrics".

Snapchat has rubbished the allegations, according to various reports.

"The simple fact is that he (Mr Pompliano) knows nothing about Snap's current metric," the company's attorneys reacted, according to Variety.

Promoted
Listen to the latest songs, only on JioSaavn.com
Headquartered in Los Angeles, California, Snapchat is a popular image messaging mobile application with over 500 million downloads through Google's Play Store. It was created in 2011 by Stanford University students Evan Spiegel, Bobby Murphy and Reggie Brown.

Last month, Snapchat's parent company - Snap Inc - raised $3.4 billion through an Initial Public Offering (IPO).  Despite Snapchat's net loss rising 38 per cent last year, the IPO enabled it to secure a market valuation of US$ 24 billion, which is more than twice the size of rival Twitter. It also made Snapchat the richest valuation in a US tech IPO since Facebook in 2012.