The evacuation exercise was carried out jointly by the Trishakti Corps of the Army and the Indian Air Force. 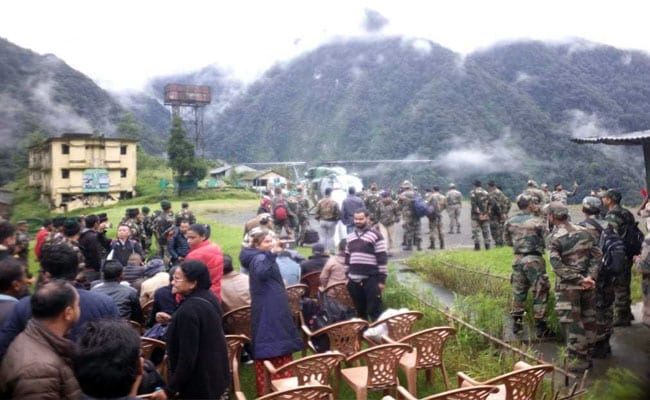 Over 100 tourists, including a pregnant woman, who were stranded in North Sikkim due to incessant rains and landslides were evacuated by the security forces Sunday.

The evacuation exercise was carried out jointly by the Trishakti Corps of the Army and the Indian Air Force.

The helicopters made several sorties from Gangtok and Sevoke and nearly 100 people, including elderly persons, women, and children, were evacuated from remote villages of Dzongu, Chungthang, Lachung and Lachen, an Army statement said.

All these tourists were bound for Yumthang valley in North Sikkim.

Medical help was extended to the people facing problems before the airlifting began, the statement said.

On arrival at Sevoke in West Bengal and Gangtok, the tourists requiring medical assistance were re-examined and their onward journey to their homes was facilitated.

The evacuation operation will continue till all stranded personnel were moved out from the affected areas, it said.

The army has also made necessary arrangements for tents, blankets and food for the stranded tourists.