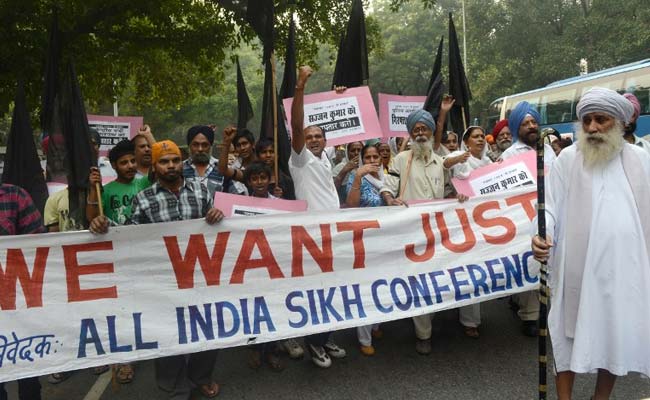 File photo: A protest organised by families of the victims of 1984 anti-Sikh riots. (Agence France-Presse)

The Centre's decision to set up a Special Investigation Team to probe the closed cases of the 1984 anti-Sikh riots -- reported by NDTV earlier today -- has come under opposition fire. Both Congress and the Aam Aadmi Party have questioned its timing and called it a gimmick for the coming elections in Delhi.

The Home Ministry has taken a decision to have a relook at the cases Delhi Police closed even before they could reach courts, sources told NDTV. The official announcement will be made after the assembly elections in Delhi - slated for February 7.

"The riots called for deep analysis and research. The Aam Aadmi Party had formed a SIT but as soon as our government was removed from power, the Union government put the idea in cold storage," said AAP chief Arvind Kejriwal.

His party colleague HS Phoolka called the timing "highly suspicious". "Just a week before election, a leak has come in the media. This is very unfortunate. It is a joke in the riot victims," he said.

"Why raise the issue just four-five days prior to elections?  Is this an electoral ploy? Justice cannot be an electoral game," said Haryana's Congress legislator Randeep Singh Surjewala. Also, "any injustice done in Gujarat, Muzaffarnagar, should all be investigated and (the guilty)brought to book," he added.

Altogether, 237 cases have been closed by Delhi police, Mr Phulka said. "Two cases are still pending investigation by CBI. No charge-sheet was filed against Sajjan Kumar and (Jagdish) Tytler. All these cases and not selective ones need a complete re-look."

Home Minister Rajnath Singh had recently described the riots as "genocide" and assured victims that government will bring the culprits to justice. Today, his junior minister Kiren Rijiju said everything should not be seen from the perspective of elections.

Promoted
Listen to the latest songs, only on JioSaavn.com
Sources said the government's decision came after a report by a panel headed by Justice (retired) G P Mathur suggested that fresh probe be carried out in the instances where despite having evidence, police closed the cases. There were 225 such cases and these included cases against Congress leaders Sajjan Kumar and Jagdish Tytler, the committee said.

The riots, in which around 3000 people died, took place after the assassination of former Prime Minister Indira Gandhi by her Sikh bodyguards in 1984. It was alleged that the mobs were instigated and in some cases led, by Congress leaders.