Wildlife SOS did not disclose the name of the forest the tortoises will be released to, so as to keep the poachers away. 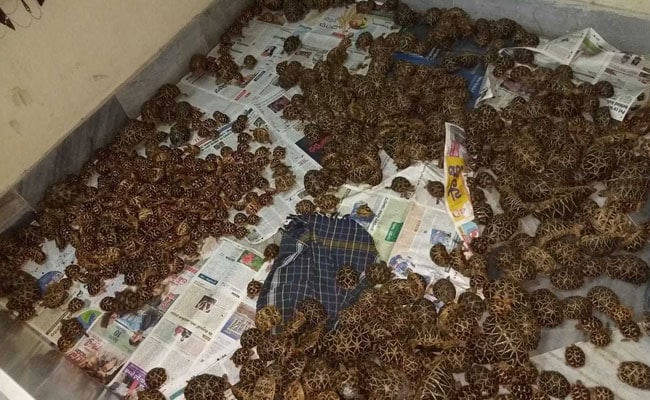 The Indian star tortoise is protected under the Wildlife Protection Act, 1972 (Representational)

About 50 Indian star tortoises were flown to Bengaluru on Monday, two years after they were allegedly smuggled from India to Singapore, an animal welfare organisation said on Tuesday.

"The tortoises were smuggled two years ago into Singapore illegally where they were confiscated by the authorities. With the cooperation from Indian and Singapore governments, the tortoises have returned to Karnataka," Delhi-based Wildlife SOS said in a statement.

Even though the star tortoises, which are native to India and Sri Lanka, Awere allegedly smuggled two years ago, they have been kept under the protection of Singapore-based Animal Concerns Research and Education Society (ACRES), a non-governmental animal welfare body, till they could be returned to India.

"It took two years to get required permissions from the government authorities to fly these tortoises back to Karnataka, from where they were smuggled according to the investigation by authorities," Wildlife SOS press officer Arinita Sandilya told IANS.

The animal welfare organisation worked with the Indian Union Ministry of Environment, Forests and Climate Change, Karnataka's Forest Department, Customs officials from Singapore and India and ACRES so as to bring these tortoises back.

The star tortoises have been kept in isolation (quarantined) at the Bannerghatta National Park in the city's southern suburb and will remain there for three months before being released into the southern state's forests.

Wildlife SOS, however, did not disclose the name of the forest the tortoises will be released to, so as to keep the poachers away.

Once the tortoises complete their three-month quarantine period, Wildlife SOS plans to radio tag (attaching radio transmitters to track location) and monitor the animals for their survival.

The Indian star tortoise, which is protected under the Wildlife Protection Act, 1972, is among one of the most trafficked tortoise species in the world owing to the unique star-like radiating pattern on their shell.

It is poached for its meat and use of body parts in traditional medicine and for exotic pet trade.

"We are relieved that the tortoises have returned to where they belong," the co-founder of Wildlife SOS Kartick Satyanarayan said in a statement.

"This landmark project not only helps augment the endangered populations in India, but will also demonstrate the commitment from the governments of India and Singapore and their zero tolerance to illegal wildlife trade," it added.

The tortoises were transported in specially designed boxes for the five-hour-long flight journey from Singapore to India.

Singapore Airlines had transported the tortoises for free, the statement said.