BJP Is Now Main Opposition In Sikkim, Where It Drew A Blank

The BJP's gain in Sikkim also comes at a time whenthere is a petition in the Supreme Court against the appointment of Prem Singh Tamang as the state's Chief Minister. 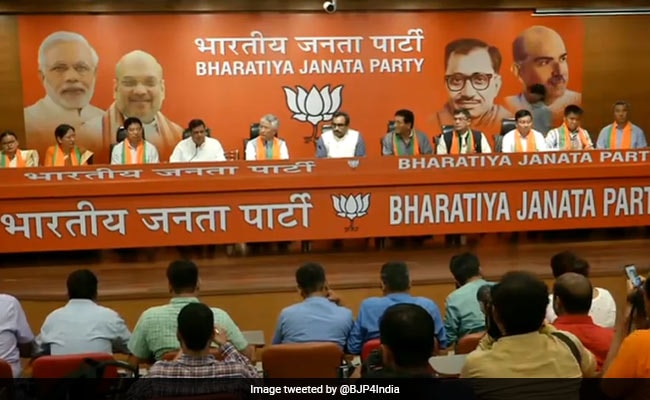 The BJP has emerged as the main opposition party in Sikkim with at least 10 MLAs of the Sikkim Democratic Front joining the BJP in New Delhi ton Tuesday. The mass exit is a huge blow to former Chief Minister Pawan Kumar Chamling, who ruled the state for five terms.

The 10 MLAs met senior leaders and were welcomed into the BJP by working president JP Nadda and general secretary Ram Madhav.

Mr Chamling's tenure ended in May after over 24 years in power when his party lost the state election to a resurgent Sikkim Krantikari Morcha or SKM.

The Sikkim Democratic Front (SDF) won 15 seats while the Sikkim Krantikari Morcha (SKM) won 17 in the 32-member assembly. Since two of the SDF MLAs had won from two seats, they resigned from one seat each, reducing the party's strength to 13 in the Sikkim assembly.

The BJP didn't win a single seat in the state polls.

The present strength of the Sikkim assembly is 29 as three seats are vacant. Three MLAs including Mr Chamling , who contested from two seats, had resigned, paving way for bypolls that are expected to be held in October.

The BJP's immediate challenge in the state will be the by-elections to the three seats.

The joining of the Sikkim Democratic Front MLAs with the BJP development does not directly threaten the ruling SKM government. However, it has the potential to break the government.

In 2016, when the BJP formed its anti-Congress political alliance for the northeast, Pawan Kumar Chamling was among its founding members. However, the regional party turned down the BJP's offer to form an alliance for the the Sikkim assembly election.

Though Mr Chamling's party is now left with just three MLAs, two of them have turned rebels and decided to formed a rebel group, a move against the larger section of the party that switched to the BJP. Sources indicated that they too might go to the BJP.

The BJP's gain also comes at a time when there is a petition in the Supreme Court against the appointment of Prem Singh Tamang as the state's Chief Minister.

Ram Madhav, the BJP's northeast in-charge, said the party will play the role of a constructive opposition in the state. Two-thirds or more numbers of the MLAs of a party can join another party without violating the anti-defection law.