"You are the support of every victory of my life," wrote Madhya Pradesh Chief Minister Shivraj Singh Chouhan. 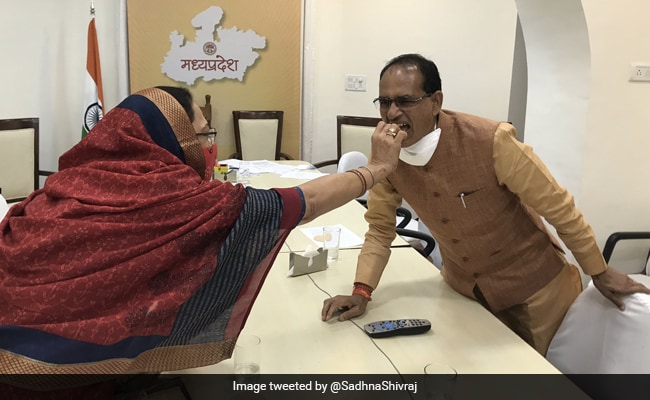 Madhya Pradesh Chief Minister Shivraj Singh Chouhan - whose government registered a crucial win in the state bypolls by winning 19 out of 28 seats - hailed his wife as his "strength and inspiration" in a tweet shared this morning.

"You are the support of every victory of my life. You are the source of my strength and inspiration. If you are with me, there will always be victory," the Chief Minister wrote in Hindi.

Shivraj Singh Chouhan was responding to an early-morning tweet from his wife, Sadhna Singh Chouhan, who congratulated him on the bypolls result. She posted a picture that shows her leaning across a table to feed him a celebratory sweet and wrote, "Congratulations on the victory."

The BJP won 19 out of the total 28 seats where bypolls were held in Madhya Pradesh, decimating the Congress that managed to secure just 8 seats.

Polling was held on November 3 on the 28 seats. By-elections were necessitated following the resignation of 25 MLAs and the death of three legislators earlier. In March this year, 22 Congress MLAs resigned from the state Assembly, paving the way for BJP's Shivraj Singh Chouhan to take over as Madhya Pradesh Chief Minister for the fourth time.

Counting of votes, which began at 8 am finally ended at around 3 am on Wednesday.