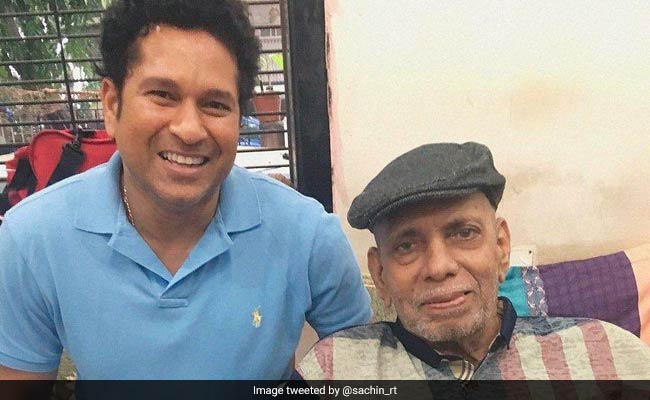 Sachin Tendulkar's coach Ramakant Acharekar died on Wednesday. He was 87.

"Why wasn't Padmashree and Dronacharya awardee Ramakant Acharekar given state funeral and respect by the Maharashtra government? The Government has shown complete disregard towards Ramakant Acharekar. Sachin Tendulkar should boycott government programs henceforth," he tweeted.

Mr Acharekar died at the age of 87 in Mumbai on Wednesday. The Dronacharya awardee, who has blessed the Indian cricket with the likes of Sachin Tendulkar and Vinod Kambli, used to train cricketers at Shivaji Park in Dadar.

A senior Maharashtra minister on Thursday said Mr Achrekar was not given a state funeral was due to a "communication gap" at the government level.

Maharashtra Housing Minister Prakash Mehta, who represented the state government at the funeral of the celebrated cricket coach, said Mr Achrekar not being given a state funeral was "sad and unfortunate".

Heaping praise on Mr Achrekar for his outstanding contribution in shaping the lives of cricketers, the Sena, in an editorial in party mouthpiece 'Saamana', said the government not according a state funeral was "troubling" and "harrowing".

"The government forgot to fulfil its responsibility and accord a state funeral to the great Acharya and blamed it on a communication gap. It is as much troubling as it is harrowing," the Sena said.

The Sena, however, stressed that not being accorded a state funeral did not lessen Mr Achrekar's contribution to the game in any way but only exposed the inefficiency of the government.

Last year on Guru Purnima, Sachin Tendulkar along with Atul Ranade had met and paid respects to their guru.

"Today, #GuruPurnima, is the day we remember those who have taught us to be better versions of ourselves. Achrekar Sir, I couldn't have done all this without you. Don't forget to thank your gurus and take their blessings. #AtulRanade and I just did," Mr Tendulkar had said.

Today, #GuruPurnima, is the day we remember those who have taught us to be better versions of ourselves. Achrekar Sir, I couldn't have done all this without you. Don't forget to thank your gurus and take their blessings. #AtulRanade and I just did. pic.twitter.com/FOS64baoB3

He had also posted a video on Twitter as a tribute to his Coach on Teacher's Day.

"Back in my school days, I used to play only for the junior team and our senior team was playing the Harris Shield finals at the Wankhede Stadium," Mr Tendulkar had said, adding that Ramakant Achrekar Sir had organised a practice match and had told him to go there after school and bat at number four.

"Sir said he had spoken to the captain and you would not need to field. That used to be my training. That was important because you needed to figure out your game there and figure out how to score runs in the middle," Mr Tendulkar had added.