Rahul Gandhi has been unrelenting in his attack on the centre over the Ladakh clash, saying that it was "crystal clear" that the government was "fast asleep" and jawans paid the price. 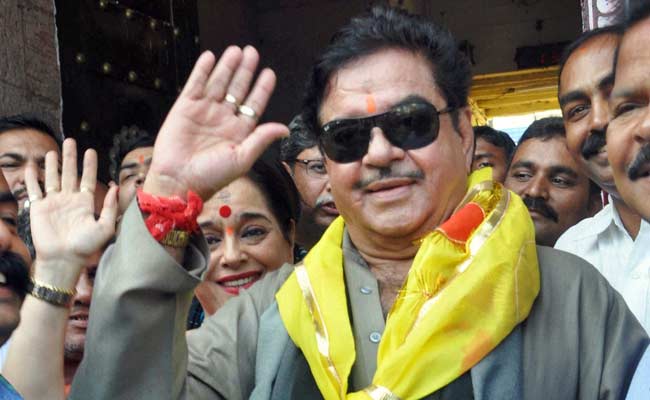 Earlier in the day, Shatrughan Sinha had wished Rahul Gandhi on his birthday. (File)

While Congress leader Rahul Gandhi kept up his attack on the government for its handling of Chinese aggression in Ladakh that resulted in the death of 20 Indian soldiers this week, party leader and veteran actor Shatrughan Sinha on Friday sounded a different note, endorsing Prime Minister Narendra Modi.

"We must talk in one voice on the sensitive matter of #IndoChina. The entire nation is with the Hon'ble PM @narendramodi. I had appealed earlier too, that we need to be cautious while talking & all must be united," Mr Sinha tweeted.

The 74-year-old's comment came just hours after he sent "warm and loving birthday wishes" for Mr Gandhi, who he described as a "young, dynamic, forthright leader".

Mr Gandhi, however, was unrelenting in his attack on the centre over the Ladakh clash, saying that it was "crystal clear" that the government was "fast asleep" and jawans paid the price. He posted the fresh charge hours before an all-party meeting on the India-China that his mother and Congress president Sonia Gandhi is expected to attend.

"It's now crystal clear that: 1. The Chinese attack in Galwan was pre-planned. 2. GOI was fast asleep and denied the problem. 3. The price was paid by our martyred Jawans," the Congress leader tweeted, sharing a report quoting junior defence minister Shripad Naik as saying the attack was planned.

On Thursday, Rahul Gandhi had posted that soldiers were sent "unarmed to martyrdom". He was fact-checked by Foreign Minister S Jaishankar, who said soldiers always carry arms but the rules of engagement do not allow use firearms during face-offs.

Indian soldiers were assaulted with iron rods and clubs wrapped in barbed wire laced with nails in the fight with the Chinese in Galwan Valley in eastern Ladakh on Monday, close to the Line of Actual Control. Many were thrown off a steep ridge and some of the soldiers fell into the river Galwan.

The dramatic escalation in hostilities came after weeks of reports of the Chinese ramping up their military presence in the area and intruding into Indian territory throughout which the government maintained there was no cause for concern.

Speaking out two days after the encounter with Chinese forces, Prime Minister Narendra Modi said he wanted to assure the nation that the sacrifice of Indian soldiers would not go in vain and India, while peace-loving, is capable of giving a fitting reply if provoked.

1,040 Militants Of 5 Outfits Surrender In Assam