The video footage tweeted by Mr Gandhi also shows many other Indian students moving around in the dark bunker. 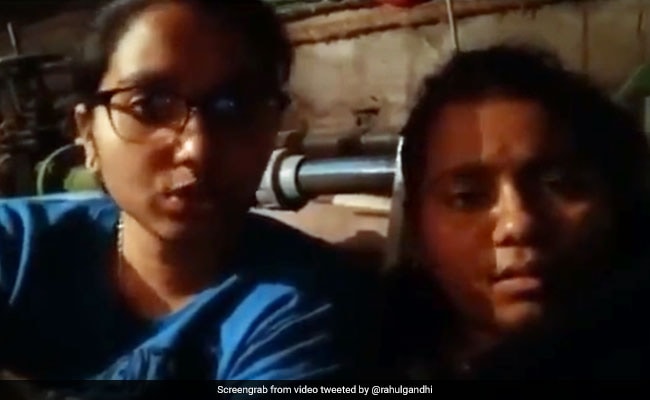 India has identified safe routes that it plans to use to evacuate its citizens from Ukraine.

Congress MP Rahul Gandhi today tweeted a video of distressed Indian students who have been stranded in war-torn Ukraine and urged the government to urgently evacuate them.

In the dimly-lit video purportedly from inside one of the bunkers where many have been hiding, two students from Karnataka's Bangalore are appealing to the Indian embassy in Ukraine to rescue them. They claim that no help is forthcoming from Indian officials.

Visuals of Indian students in bunkers are disturbing. Many are stuck in eastern Ukraine which is under heavy attack.

My thoughts are with their worried family members. Again, I appeal to GOI to execute urgent evacuation. pic.twitter.com/alem9nYNgr

One of the students, who identified herself as Meghna from Bangalore, said Indians from all parts of the country have been stranded in the bunker for over 24 hours without food, water, or even proper ventilation.

"No special flights have been accommodated for us. We have been staying at this bunker...it's really hard for us. We request you to send help as soon as possible," she says.

The video footage tweeted by Mr Gandhi also shows many other Indian students moving around in the dark bunker.

The video ends with a child who identifies himself as Meghna's brother. He appeals for help to get his sister back. "My sister is stuck in Ukraine. Can you please help her? I want her back," he says.

The Indian embassy in Ukraine today advised its citizens not to move to any of the border posts without coordination with its officials. Thousands of Indians have been stranded in the country and are desperately seeking a way out.

"The situation at various border checkpoints is sensitive and the Embassy is working continuously with our Embassies in our neighbouring countries for coordinated evacuation of our citizens," the Indian embassy in Ukraine tweeted this morning.

The embassy said that it's finding it "increasingly difficult" to help Indian nationals who reach border checkpoints without prior intimation.

"Staying in western cities of Ukraine with access to water, food, accommodation and basic amenities is relatively safer and advisable compared to reaching border checkpoints without being fully abreast of the situation," the embassy said.

To those currently in the eastern parts of the country, the embassy has advised them to remain in their current places of residence until further instructions.

"Maintain calm, and stay indoors or in shelters as much as possible, with whatever food, water and amenities available and remain patient. Avoid unnecessary movement," it said.

India has sent government teams to Ukraine's borders from Hungary and Poland to evacuate the citizens who are still stuck in the country. The officials are travelling via land, as the Ukrainian airspace has been closed amid an onslaught by the Russian military.

India has also identified safe routes that it plans to use to evacuate its citizens from Ukraine. "The safe routes have been identified. By road, if you go from Kyiv, you would reach Poland in nine hours and Romania in nearly 12 hours. The road has been mapped out," Harsh Vardhan Shringla, India's Foreign Secretary, said yesterday.

The Ministry of Foreign Affairs (MEA) has set up a dedicated 24*7 control room to provide assistance and information to Indians in Ukraine.