News of the sedition charges comes hours after the Supreme Court called the law "colonial", and asked the centre if it is "still necessary after 75 years of Independence"

Police in Haryana have charged over 100 farmers with sedition after they allegedly attacked and damaged the official vehicle of Deputy Speaker Ranbir Gangwa during a protest against members of the state's ruling BJP-Jannayak Janata Party alliance and the controversial new farm laws.

The incident took place in Haryana's Sirsa district on July 11. The FIR was filed on the same day.

Apart from sedition, the FIR also charges farmers with 'attempt to murder'. Two leaders of the farmers' movement - Harcharan Singh and Prahlad Singh - were among those named in the FIR.

In a statement issued yesterday, the Samyukt Kisan Morcha (one of the protesting groups) slammed the charges, calling them "false, frivolous and cooked up" and vowing to contest them in court.

"Farmer leaders Harcharan Singh and Prahlad Singh and around 100 farmers have been booked under false cases... with grave charge of sedition... merely because they were protesting against Haryana Deputy Speaker in Sirsa," the statement said.

"SKM strongly condemns false, frivolous and cooked-up sedition charges, and indeed all other charges, against farmers and farmer leaders under instructions of the anti-farmer BJP government of Haryana," it added.

News of the sedition charges comes hours after the Supreme Court described the law "colonial", and asked the government if it is "still necessary after 75 years of Independence".

The law is a threat to the functioning of institutions and holds "enormous power" for misuse with no accountability for the executive, the court said, asking the centre why it "is not looking into this law".

"If a police officer wants to fix anybody in a village for something, he can use Section 124 A... People are scared," a top court bench led by Chief Justice NV Ramana said.

The court today also agreed to hear a fresh challenge to the controversial law - one mounted by a former Army officer. Major-General SG Vombatkere (retd) has challenged the constitutional validity of the law on grounds it causes a "chilling effect" on freedom of speech and expression.

Protesting farmers in Haryana have made their displeasure clear over the past few days, with demonstrations in Fatehabad, Jhajjar, Hisar and Yamunanagar leading to clashes with the police. 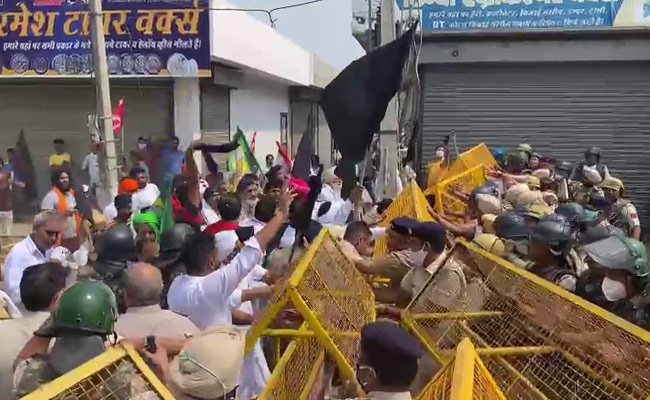 The farmers have stressed that they will not allow members of Haryana's ruling BJP-Jannayak Janata Party alliance to address any public events while their demands go unmet.

Haryana Chief Minister Manohar Lal Khattar struck an ominous note last month as he warned farmers "it won't be good for anyone to cross their limit".

"We have maintained patience but they keep threatening us...  that Chief Minister, Deputy Chief Minister can't visit villages. Those running the government have a responsibility to meet people... we are keeping our calm... but it won't be good for anyone to cross their limit," he said.

Farmers have been protesting the farm laws - which they say will leave them at the mercy of corporate interests, but the government insists will help them - since June last year.

Several rounds of talks have failed to break the deadlock.

This month Union Agriculture Minister Narendra Singh Tomar invited farmers for further talks, but stressed that the farmers' primary demand - scrapping of the laws - will not be considered.

Protesting farmers, led by Rakesh Singh Tikait, plan to hold a peaceful protest outside the parliament in Delhi when it convenes for the monsoon session on July 19.