Arvind Kejriwal On Sealing: "Will Sit On Hunger Strike If Issue Not Solved By March 31"

Arvind Kejriwal meets traders protesting sealing at Lajpat Nagar. Mr Kejriwal said he will sit on dharna if issue is not solved by March 31 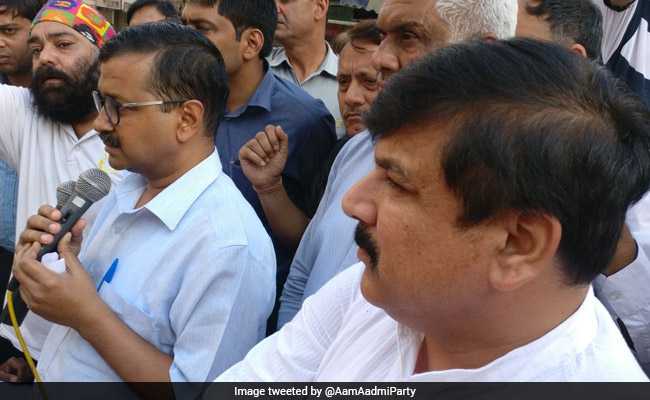 Arvind Kejriwal assured traders of taking up sealing issue with the centre. (File)

New Delhi: The Chief Minister of Delhi Arvind Kejriwal is at the Amar Colony Market, meeting shop owners who are protesting the civic body's sealing drive.

Reports suggest more than a hundred traders are trying to stop traffic, protesting what they call forceful sealing by the municipal corporation.

A scuffle between policemen and traders have reportedly broken out. The Aam Admi Party tweeted "MCD's forceful sealing is resulting in a huge loss to traders.

Promoted
Listen to the latest songs, only on JioSaavn.com
Mr Kejriwal has met the traders and assured them of taking up the issue with the centre.

“If sealing problem is not solved before 31st March then Kejriwal will sit on hunger strike. We will put pressure on Centre Government.”
CM @ArvindKejriwalpic.twitter.com/pyN4xqEJF0

The AAP government has blamed the Centre of turning a blind eye to the misery of traders who are incurring huge losses, they say. AAP claims around 400 shops out of 700 have been sealed by the Municipal Corporation of Delhi.

The sealing drive has become a tussle between the AAP government of Delhi and the BJP backed civic body.