Operating on a tip-off about illegal transshipment of sea cucumber, the Indian Coast Guard team swung into action and tracked the suspect Vallam (boat) involved in likely smuggling. 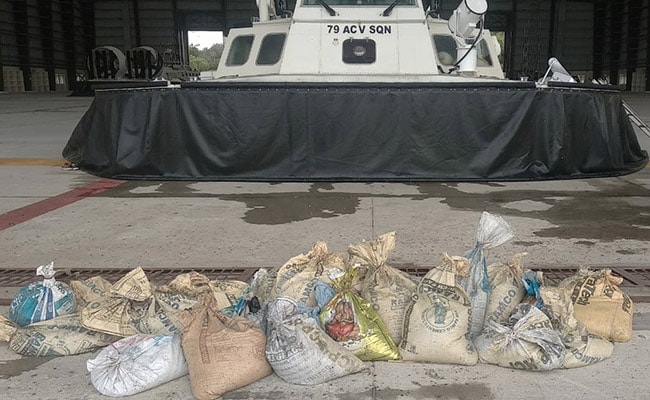 At least 600 kg of banned sea cucumber was recovered from a boat off Ramanathapuram.

The Indian Coast Guard today said it has recovered 600 kg of banned sea cucumber from a boat off Ramanathapuram.

The value of the seizure was around Rs three crore, the ICG said in a release.

Operating on a tip-off about illegal transshipment of sea cucumber, the ICG team swung into action and tracked the suspect Vallam (boat) involved in likely smuggling, it said.

In a swift operation @IndiaCoastGuard Hovercraft seized 600 kg #SeaCucumber, an #endangeredmarinespecies under wildlife protection act 1972 worth approx Rs one Cr. from a boat near Mandapam #TamilNadu. Seized items handed over to Forest dept #harkaamdeshkenaampic.twitter.com/7EqR6RzeAp

"ICG Team was immediately deployed in Palk Bay area to cordon the likely escape by sea route. Subsequently, the vallam was found to be anchored off Uchhippulli, Ramanathapuram in the afternoon today. The vallam was thoroughly rummaged by the team of Indian Coast Guard. The boarding team recovered 31 gunny bags of sea cucumber weighing 600 kg," it said.

Sea Cucumber are listed as protected species under Scheduled-I of Wildlife Protection Act of 1972, it added.