Schoolchildren Pulled Out From Bus Stuck In Water In UP: Watch 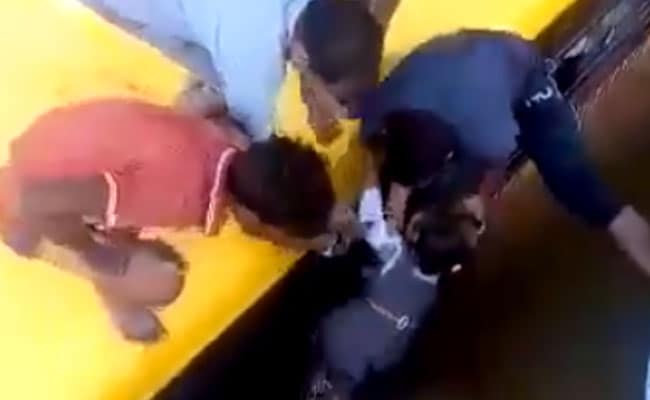 A group of schoolchildren is seen on a video being rescued one by one from a bus that is stuck in deep water under a railway bridge in Uttar Pradesh. The water level reaches till the windows of the bus.

The UP police tweeted the video of the incident that happened in Ramnagaria, 196 km from Lucknow. The bus is boxed in by the concrete walls of the railway underpass as it stands still in the muddy water.

Nine men are seen on the roof of the bus giving instructions to the frightened schoolchildren inside not to panic. A few men wade through the muddy water, grab the iron handrails on the windows and peek inside to check the condition of the students.

One by one the children are pulled out from the door of the bus by three men who are standing on the roof. Another group of men waiting on the other side of the bus receives them. The children are then lifted up by waiting rescuers on the ground level, completing the rescue.

"When we got information the children are trapped we immediately sent some people to rescue them," the UP police tweeted.

It is not known how the bus managed to get there. The water appears to be stagnant, suggesting the driver could have misjudged the depth while trying to get pass it.

It had been raining in some parts of UP four days ago. Shahjahanpur, 23 km from the district where the bus incident happened, bore the maximum brunt of the weather's onslaught.