Braving heat, hundreds of people from 15 villages in the district took part in a 45-day-long "Shramdaan Abhiyan" (voluntary labour campaign) in April-May to build infrastructure for rainwater harvesting. 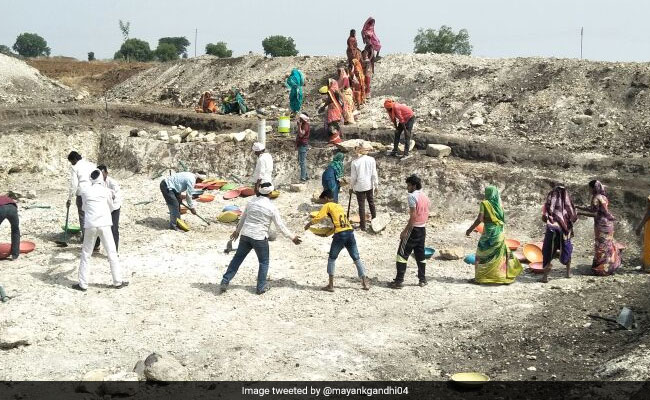 Braving heat, hundreds of people from 15 villages in the district took part in a 45-day-long "Shramdaan Abhiyan" (voluntary labour campaign) in April-May to build infrastructure for rainwater harvesting.

However, lack of adequate rainfall in the district, which is part of the parched Marathwada region in Central Maharashtra, has rendered villagers' efforts to overcome water crisis ineffective, at least for now.

The campaign was launched on April 8 by an NGO run by social activist and former AAP leader Mayank Gandhi, who has adopted these villages, having a total population of 30,590, for water conservation and preservation.

"But unfortunately, there has been very little rainfall in the district which is a matter of serious concern," Mr Gandhi told PTI.

"Villagers are feeling helpless before nature. No water conservation method can work without rains. Crops have already failed. Cotton plants have not grown beyond 9 inches (as against normal height of 4 feet). Hope, things will change soon," he added.

Parli has only 1.72 per cent irrigated area as against the national average of 40 per cent and the Maharashtra average of 18 per cent.

Anant Rupnar, a farmer from Parchundi village, said people are hoping the rain gods will smile and their efforts will bear fruit.

"After working very hard during the entire month of May, we pinned our hope on the rain gods, but it seems, they are evading us."

"It seems all our efforts are going waste in absence of rains. Soybean crops are drying in farms and cotton crops are getting destroyed as worms are eating away the cotton fibre, causing financial loss to us," he said.

Water conservation will take place when there is enough water, Mr Rupnar said.

Mukteshwar Kadbhane, a farmer from Bhilegaon village, said if it does not rain heavily in the next three to four days, cotton crops will get almost destroyed.

"After first monsoon rains in early June, farmers planted cotton and soyabean crops. But because of the large gap (in rainfall) from first week of June to now, the crops have failed. If it rains in the 3 to 4 days, then it is okay, otherwise our crops will fail completely," he said.

"Our crops of moong (split Green gram), urad (split black gram), corn and jowar (sorghum) are almost 60 per cent lost. There is a very little chance for the revival of these crops," Mr Kadbhane added.