'Save Viraat Or Let Us Tow It Back To UK': Trust To PM, Boris Johnson 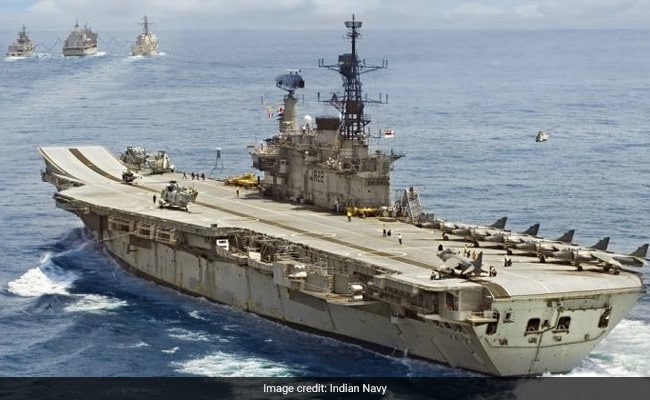 All efforts to save Viraat, known as the 'Grand old Lady' failed after she was decommissioned.

Ahead of the likely visit of the British Prime Minister Boris Johnson to India as Chief Guest at the Republic Day next month, a British trust has written to Prime Minister Narendra Modi and Mr Johnson for help in saving Viraat, the decommissioned Indian Navy aircraft carrier which had also served with distinction in the Royal Navy as HMS Hermes.

Without help from PM Modi, the process of demolishing the ship at a shipbreaker in Alang could begin any day.

In their letter to both the leaders, the Hermes Viraat Heritage Trust has gone to the extent of suggesting that if all else fails, India allow the 23,900 ton warship to be towed back to the United Kingdom where a maritime museum can be set up. ''The Trust has obtained quotes from reputable towing experts for the long tow to the UK from Mumbai, India,'' says the letter accessed by NDTV. If this were permitted, the Trust would create a world-class maritime museum right opposite Liverpool city centre, a city with a strong maritime heritage.

At the moment though, the trust continues to work with its India partners, Envitech, to try and convert the Viraat into a maritime museum off the coast of Goa. This plan received a serious setback on December 4, ironically celebrated as Navy Day in India. 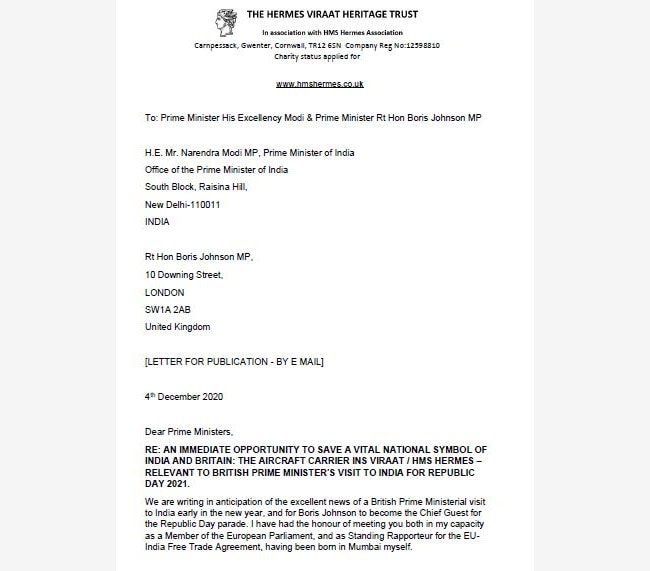 In their letter to the Prime Ministers of the two countries, the Trust says, ''the aircraft carrier is a Guinness World Record Holder"

On that day, Envitech received a letter from the Defence Ministry formally rejecting sanction of a 'No Objection Certificate' which the Shree Ram shipbreakers group in Alang wanted in order to sell the warship to the group. Without this NOC, the Shree Ram group, which bought the Viraat from the government for scrap value, refuses to hand it over.

Reacting to this development, the Managing Partner of Envitech, Rupali Sharma had told NDTV, ''unfortunately, this has now become a game of 'chicken and egg'. The seller won't sell without the NOC and now the Ministry of Defence won't issue the NOC as it claims that the seller doesn't want to sell. The clear intent is to proceed with destroying the ship.''

At the moment, the Viraat lies docked off the coast of Alang with Envitech intent on approaching the Supreme Court of India. A plea is expected to be filed any day.

In their letter to the Prime Ministers of the two countries, the Trust says, ''the aircraft carrier is the Guinness World Record Holder for being the longest serving active warship in the World.'' Laid down during 1944 during the Second World War, the ship was launched in 1953 and entered the Royal Navy in 1959 as HMS Hermes.

Embarking Sea Harrier jump-jets, the Hermes ''achieved great world fame as the Flagship in the 1982 Falklands War, returning in triumph to popular acclaim.''

In 1986, Hermes was sold and become INS Viraat, the flag-bearer of Indian maritime power for 31 years before she was decommissioned on 6 March 2017. She flew Sea Harrier fighters and Sea King helicopters off her deck and was the Indian Navy's only operational aircraft carrier until the Russian-built INS Vikramaditya entered service.

All efforts to save Viraat, known as the 'Grand old Lady' failed after she was decommissioned. Despite statements of interest from the Andhra Pradesh and Maharashtra governments, there was never any real progress to converting her into a maritime museum.

Now, at the eleventh hour, there is a desperate effort to save a part of the maritime heritage of both India and the United Kingdom. Will the government of India belatedly agree to save a global symbol of shared history - a warship which steamed the equivalent of 700,000 miles, in other words, 28 times around the world, just in her role as the Indian Navy's flagship?