The three-time National Award winner was being treated in the Guru Nanak Hospital since June 20 after she complained of breathing issues. 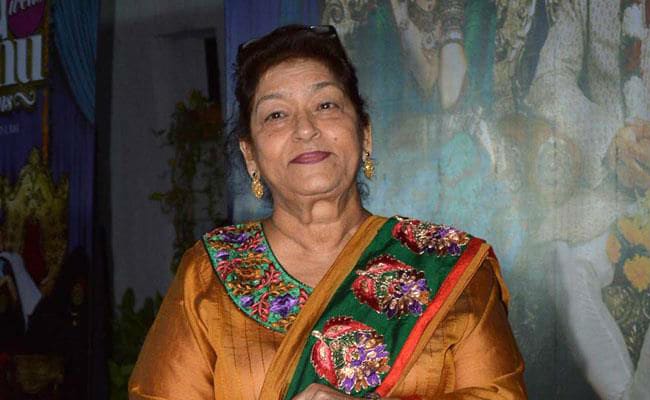 The last rites of Saroj Khan will be peformed at Malvani in Malad, Mumbai, news agency ANI reported.

Veteran choreographer Saroj Khan died this morning in Mumbai after she suffered a cardiac arrest. She was 71.

The three-time National Award winner was being treated in the Guru Nanak Hospital since June 20 after she complained of breathing issues. The mandatory COVID-19 test done at the hospital showed a negative result.

"She passed away due to cardiac arrest at around 2.30 am at the hospital," Saroj Khan's nephew Manish Jagwani told news agency PTI.

Tributes for the veteran choreographer poured in from Bollywood, where she choreographed over 2,000 songs in a career spanning over four decades.

"I'm devastated by the loss of my friend and guru, Saroj Khan," tweeted Madhuri Dixit, who was the star of several iconic dance songs, choreographed by Saroj Khan.

Actor Akshay Kumar, who was one of the first ones to condole Saroj Khan's death on Twitter, described her as someone who "made dance look easy almost like anybody can dance, a huge loss for the industry."

Woke up to the sad news that legendary choreographer #SarojKhan ji is no more. She made dance look easy almost like anybody can dance, a huge loss for the industry. May her soul rest in peace

"Saroj Khan my beloved Masterji. #RIPSarojKhan From Music Videos to films we had a long journey together. Now you've left me and gone. I will do and make what we spoke about one day, my promise to you," film director Kunal Kohli wrote on Twitter

Director and choreographer Remo D'Souza said the death of Saroj Khan was a big loss to dance fraternity.

#RIP SAROJI YOU WILL BE MISSED .... big loss to dance fraternity ..... pic.twitter.com/1Kv5B6CpKv

Riteish Deshmukh wrote on Twitter: "Rest in Peace Saroj Khan ji. This loss is immeasurable for the industry and film lovers. Having choreographed more than 2000 songs she single handedly changed the landscape of how songs were shot. I had the pleasure of being Choreographed by her in Aladin. One tick off my bucketlist."

"Saroj ji's name introduced the word 'choreographer' to my life. A genius who immortalised stars and the music that defined an era with her iconic work. May her loved ones find strength and courage at this terrible hour. There'll never be another...(sic)," actor Nimrat Kaur tweeted.

The last rites of Saroj Khan will be peformed at Malvani in Malad, Mumbai, news agency ANI reported.

Maharashtra Home Minister Anil Deshmukh was one of the first politicians to pay condolences to the renowned choreographer.

"My heartfelt tribute to Saroj Khan, the renowned choreographer who part of 2,000+ evergreen songs. I share the grief of his family, colleagues in the film world and all the fans," he tweeted.

Environment Minister Prakash Javadekar remembered her as a genius choreographer who entertained all with her iconic work.

"Saroj Khan was a genius choreographer, who impressed and entertained all with her iconic work. Shocked to know about her demise. A big loss to the film industry. Condolences to her family, friends & fans. Om Shanti," Mr Javadekar tweeted.

Saddened to hear of the demise of #SarojKhan . She was the one who institutionalised choreography in Indian Cinema. pic.twitter.com/m6NXctJ2mt

The Congress party remembered Saroj Khan as someone who brought life to music with her choreography.

"We deeply mourn the loss of ace choreographer Saroj Khan. A veteran in her field, she brought life to music with her choreography. Our thoughts & prayers are with her friends & family in this time of grief," read the tweet from Congress's Twitter handle.

My condolences to the family, friends and fans of Saroj Khan ji, really saddened to hear the news of her passing away.
A lot of my childhood memories are of actors and actresses dancing to her steps as an ace choreographer. Rest in peace.

"Deeply saddened to hear about the demise of the legendary choreographer Saroj Khan Ji. Her passing away is an irreparable loss for our film industry. I offer my condolences to her family, friends & legions of admirers," Union minister Hardeep Singh Puri tweeted.

In a career spanning more than four decades, she choreographed more than 2000 songs. May Waheguru grant eternal peace to her soul pic.twitter.com/DTP1wRtIza

In a career spanning over four decades, Khan is credited with choreographing more than 2,000 songs, including "Dola Re Dola" from Sanjay Leela Bhansali''s "Devdas", "Ek Do Teen" from Madhuri Dixit-starrer "Tezaab" and "Ye Ishq Haaye" from "Jab We Met" in 2007.