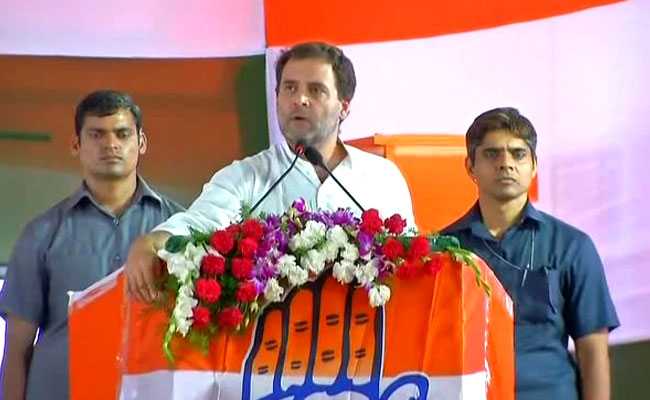 Congress president Rahul Gandhi made an election pitch in Telangana today with a scathing attack on the Narendra Modi government and the state's ruling Telangana Rashtra Samithi. The NDA and the TRS have the "same style", he said. Chief Minister K Chandrashekar Rao, who had been batting for a non-Congress-non-BJP Federal Front, was seen as inching closer to the BJP after his party voted for the government in last week's election for the Rajya Sabha deputy chairman's post.

"Modi ji says he would put 15 lakh rupees in everyone's bank account. Here, the Chief Minister says he will give double bedroom house to everyone. Both make big promises but will not fulfill,'' Mr Gandhi said at a public meeting at Serilingampally on the outskirts of Hyderabad.

At a meeting with women from self-help groups prior to a public meeting, Mr Gandhi said PM Modi's government was interested in giving money only to big fraudsters and claimed the Congress government would channelise it to small and medium businesses and to SHG groups.

Attacking the family of Chief Minister K Chandrashekar Rao, he said Telangana had become the capital of corruption. "They grab land, one family is ruling and one family is benefitting. No one else benefits," he said scathingly.

Over the last four years, there have been 4,000 farmer suicides the state had turned revenue deficit. "Farmers' land is snatched; they promise dalit adivasi farmers 3 acres each, whereas that has not happened,'' he said.

The Prime Minister had promised 2 crore jobs, but he has not fulfilled even a small percentage of it, the Congress chief said, pointing out that though there are one lakh government jobs vacant, in the last 4 years, only 10,000 jobs were given.

Both NDA and TRS were making false promises everywhere and when the Congress comes to power at the Centre and the state, it would ensure special category status for Andhra Pradesh and fulfill all promises made during bifurcation to both states.

"Why does the Telangana government support Modi on demonetisation, GST and so on, even though the Centre has not done enough for Telangana?'' Mr Gandhi questioned. "Once we come to power, we will fulfill promises made to Telangana and to Andhra Pradesh, because it is your right.''

"In Karnataka, we promised we will waive farm loans and we fulfilled it. I won't make false promises. We will fulfill all promises once we come to power in Delhi and in Hyderabad,'' he said.

Rahul Gandhi said the non-performing assets had gone up from 2.5 lakh crores during the end of UPA rule to 12 lakh crore rupees during NDA rule. "The banking system is jammed... PM wants to waive loans of the richest defaulters,'' he added.