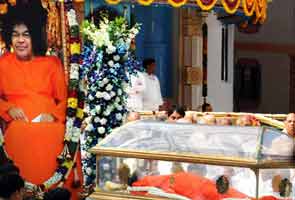 Bangalore: Even before the mortal remains of Sathya Sai Baba can be laid to rest, a quest is on for control over the trust. While the assets with trust are officially assumed to be Rs 40,000 crore, an unofficial estimation runs to over Rs 1.4 lakh crore.

Sathya Sai Central Trust is the administrative body running health and educational institutions, and the Baba was supreme as authorised signatory of bank accounts. With no heir apparent, many are vying to become the trust's president.

Though devotees are deep in mourning at the passing of their guru, they are still concerned about the future of the trust and its assets.

"Baba taught us not to give importance to worldly wealth, but the trust and its assets must be in safe hands in order to take forward his message and continue his social works," said Shiva Sai Baba, an ardent disciple, who runs an ashram near Chikkaballapur in his name.

"We wish the government will take the proper decision on this," he added.

The Andhra Pradesh government set rumour mills churning, when it dispatched a team of officials led by L V Subramanyam, principle secretary (finance), earlier this month, to Puttaparthi when the Baba was hospitalised. It was speculated that the government was mulling over taking over the trust.

However, Y Kirankumar Reddy clarified that his government was not considering taking over the trust. "The trust is running well and I think there should be no alteration at this point of time. It will continue as it was," he said.

However, an official source said a meeting would be held tomorrow after the last rites are performed where it would be decided what the future format of the trust would be. Even as the meeting has created much curiosity, it has kicked up hectic activities behind the scenes.

While some are arguing Chakravarthi, currently general secretary of the trust, should take over as the president, many are supporting R J Ratnakar, Baba's nephew.

Even outsiders are apparently eying the coveted position of president. Satyajit, who was Baba's caretaker and Adikeshavalu Naidu, an MP and former president of Tirupati Tirumala Devasthanam Trust are among the main contenders.

Adikeshavalu even went to the extent of alleging that the Baba's caretakers had been restricting his movements while he was ill.

He has made accusations that Baba was overdosed with drugs resulting in his health deteriorating. He claimed that trust members at Puttaparthi turned him away last week, for demanding to see his spiritual guru.

"Some politicians outside the trust are trying to hijack the trust. Need of the hour is to keep them at bay," said a trust member.

Promoted
Listen to the latest songs, only on JioSaavn.com
Though he did not name Adikeshavalu, he dropped enough hints that he was referring him. Meanwhile, Adikeshavalu said, "I am not interested in the trust matter. However, I am concerned about the future of the institutions established by the Baba. He has shown us the path and we have to proceed in that way. Right now I don't want to talk about anything related to the trust or other things because we are yet to perform the last rites."