SAD To Wait For Farm Bills' Clearance Before Deciding on Alliance: Report

A senior party leader said the priority of the SAD at the moment was to safeguard the interests of farmers, and not the alliance issue. 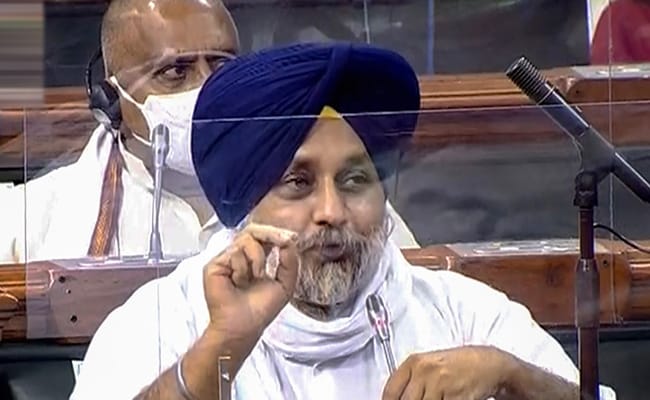 The government should refer these three bills to a select committee, SAD says (File)

The Shiromani Akali Dal (SAD) will take a call on whether to remain in the BJP-led NDA or not after taking into consideration the fate of three contentious farm bills in Rajya Sabha and consulting its cadre, party sources said on Friday, a day after its lone Union minister quit the government.

A senior party leader said the priority of the SAD at the moment was to safeguard the interests of farmers, and not the alliance issue.

The party's core group met this afternoon here with many leaders joining through video conference from Punjab to discuss its next course of action, after Harsimrat Kaur Badal's resignation in protest against the three farm sector bills.

The bills were passed by Lok Sabha this week and likely to be taken up in Rajya Sabha soon.

Asked whether the SAD would pull out of the National Democratic Alliance (NDA) as well, Ms Badal told PTI it was for the party to decide and a collective decision would be taken on the issue by all senior leaders together.

Another senior party leader Naresh Gujral said, "Even in a marriage there are disagreements. So, similarly, in coalition it doesn''t mean you have to subscribe to each other''s ideology. Each political party has to protect its interests."

Mr Gujral, a Rajya Sabha member, said the government should refer these three bills to a select committee.

Asked whether the SAD will remain in the ruling alliance or not, Mr Gujral said, "Akali Dal is very mindful of the fact that today our army is standing eye ball to eye ball with PLA at LAC. Pakistan is trying to disturb the atmosphere of Punjab."

He said the party would not take any decision which would disturb the atmosphere in Punjab, a border state.

The Akali Dal represents Sikhs, who are known for their patriotism and made huge sacrifice for the country in the past, Mr Gujral said.
He also said both the Akali Dal and the BJP feel the void created by the untimely demise of senior BJP leader Arun Jaitley.

Echoing similar sentiments, party leader Prem Singh Chandumajra said the alliance issue was not a priority for the SAD as of now as the Assembly elections in Punjab are still far away.

SAD sources said the party will wait for the fate of the bills in Rajya Sabha before taking a final call on remaining in the NDA.

The BJP is confident that numbers are stacked in its favour in Rajya Sabha for the passage of the bills -- the Farmers'' Produce Trade and Commerce (Promotion and Facilitation) Bill, the Farmers (Empowerment and Protection) Agreement on Price Assurance and Farm Services Bill, and the Essential Commodities (Amendment) Bill.